The green algae street lamps that suck up CO2

I’ve been recently flooded with emails, questions and Facebook posts with the algae street lamps that not only light up without any electricity, but also suck up a lot of carbon dioxide (200 times more than a tree). This is just such a big thing that I had to see if this actually works.

So here’s the deal: Pierre Calleja of the French start-up FermentAlg has developed what he describes as civilization’s first algae street lamp. Basically, this glowing canister of microorganisms, a prototype placed in the company’s parking lot in Bordeaux doesn’t require energy to light up, instead being powered by a battery that takes its energy from algae photosynthesis – and also sucks up a massive CO2 quantity from the air. Seriously, if this is actually true, then it’s such a big of a win-win that it just has to hit the streets. But does it really work? Isn’t this just one more of many shabby start-ups that fantesize concepts that can’t work?

From what I could dig up, FermentAlg is up to some serious stuff – and they’re doing really cool things – like using algae in food or as biofuels; also, they’ve attracted millions in investments, and that really speaks a lot. Pierre Calleja – I haven’t been able to find anything about him. No peer reviewed studies, no major projects, nothing except for the fact that he is the Chairman, CEO and Founder of FermentAlg; this is not to say that he isn’t a good scientis, let’s just get this straight. I just wish I could find more information about him. 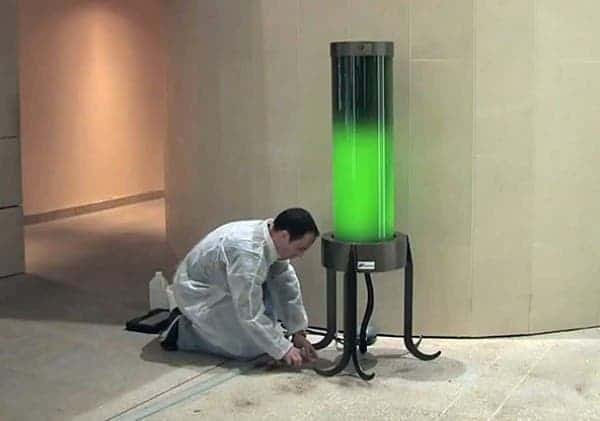 So these massive tanks during daytime absorb light, the algae inside absorbs CO2 and through photosynthesis, generates energy not only for itself, but also powers a battery that lights up during night time. It just seems to simple to work, and given my rather lackuster knowledge on algae technologies, I’ve emailed a few experts in the field, and as soon as they’ll reply, I’ll get back to you with additional details.