It seems almost too surreal to be true – a gelatinous, four meter across blob of squid eggs – but that’s exactly what divers found off the coast of Turkey, some 20 meters below sea level.

Even up close, the spheroid blob looked almost invisible, but when touched, it felt “very soft” and seemed gelatinous. But what is it? The divers didn’t know. In fact, no one seemed to know; only after the video went online did the mysterious blob get a possible ID. Dr. Michael Vecchione of the Smithsonian Museum of Natural History came with a suggestion. The scientist speculated that a squid called Ommastrephes bartramii (also known as the red flying squid or the neon flying squid) could be responsible for the mass. Red flying squids are fairly common species that grow up to 2 meters in length.

But here’s the thing – no one’s ever seen these squids laying eggs. Can they lay an egg blob, especially one as big? In all likelihood, yes. Discovering such egg masses is not without precedent, although only one of a comparable size has ever been described. In 2008, Danna Staaf and her colleagues documented, for the first time, a humboldt squid egg mass. The egg mass Dr. Staaf described was between 3 and 4 meters long and hosted between 600,000 and 2,000,000 squid eggs. If the humboldt squid can do it, then likely the red flying squid can do it too, but this raises another question: if several species can lay these blobs, then why don’t we see more of them? 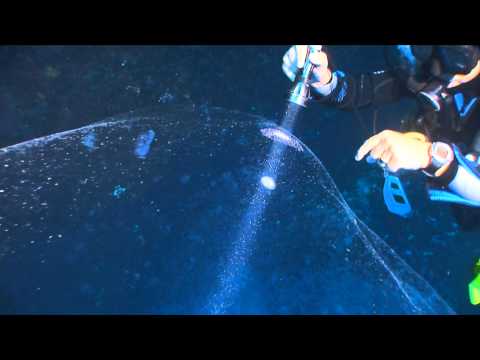 The answer is likely depth. These egg masses likely go way deeper below sea level, and only occasionally drift up to 10-20 meters. Another factor is time; it takes these eggs only a few days to hatch, so there’s a very limited time window in which you can actually observe them – so it’s no wonder that this is such a mysterious phenomenon.

In fact, there are many things we still don’t know about squids. After they hatch, they’re extremely vulnerable; they’re tiny, vulnerable, their eyes are underdeveloped and their predatory tentacles are fused together. Without any help, it’s a wonder that they even survive to grow up. Perhaps this is why they lay so many eggs, because so few of them survive, even hidden in the depths of the oceans.

But regardless, this shows us once again just how little we know about the amazing oceanic life. Hopefully, we’ll be able to learn and appreciate it before we actually destroy it.