While researchers have known for quite a while that dolphins and some birds are able to learn and change tunes, you wouldn’t really expect mice to be the next vocal sensation in the animal world. 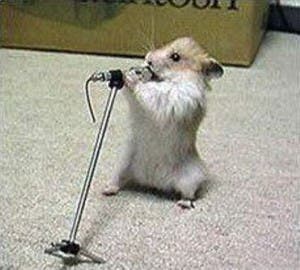 Biologists believed any vocal abilities in mice were innate, but now they found that mice also possess a (rudimentary) motor control center in their brain, which works with the vocal cords and provides voluntary control over tune and pitch – surprisingly enough, this link isn’t present in chimps and monkeys.

“The mouse brain and behavior for vocal communication is not as primitive and as innate as myself and many other scientists have considered it to be,” senior author Erich Jarvis, a neurobiologist at Duke University, explained. “Mice have more similarities in their vocal communication with humans than other species like our closest relatives,” Jarvis added, referring to chimpanzees.

So mice have the ability to sing in different pitches – and just like with humans, different mice have different “voices”; some are tenors, some have deeper basses. With this knowledge in hand, researchers placed mice in a cage with ones with a different pitch. They immediately noticed that the new mouse started changing its pitch to match the other ones. Care to take a wild guess how male mice use this ability? Getting girls, of course. Male mice learn to mimic the pitch of other males’ ultrasonic serenades and adapt to what the girls like.

“We are claiming that mice have limited versions of the brain and behavior traits for vocal learning that are found in humans for learning speech and in birds for learning song,” said Duke neurobiologist Erich Jarvis, who oversaw the study. The results appear Oct. 10 in PLOS ONE and are further described in a review article in Brain and Language.

However, not all scientists agree with the results of the study. Some believe that rather learning new tunes, the observed effects are the result of pitch convergence.

“Pitch convergences are also known from non-vocal learners and the number of tested animals is very low to see whether the discovered effect is reliable,” Kurt Hammerschmidt, senior scientist at the German Primate Center in Goettingen, Germany, wrote in an email. Hammerschmidt was not involved in the study and wrote that the convergence could be a side effect of the low number of mice tested.