Reading a dog’s mood by studying its tail wag

by Contributing Author
in Animals, Biology, Research
Reading Time: 3 mins read
A A
Share on FacebookShare on TwitterSubmit to Reddit 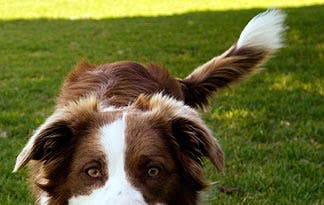 Any dog lover will tell you if you see a dog wagging its tail it’s a sign that the dog is happy. Apparently, there are subtle signals given off by variations in tail wagging and these are used to communicate with other dogs what their stance is. Researchers at University of Trento, Italy found that happy dogs wag their tails more to the right (from the dog’s point of view), while nervous dogs more to the left. Findings also show that dogs recognize and respond to these distinct patterns.

“It is very well known in humans that the left and right side of the brain are differently involved in stimuli that invokes positive or negative emotions,” says Prof Georgio Vallortigara, a neuroscientist from the University of Trento.

[RELATED] After studying dog emotions with MRI: “Dogs are people, too

“Here we attempted to look at it in other species.”

Researchers monitored dogs as they watched recordings on a TV screens of other dogs who were wagging their tails either more to the right or the left. The dogs were presented in two versions: a naturalistic version or a silhouette to get rid of any other confounding issues. Meanwhile the heart rate and behavior of the animals were monitored.

When the animals saw an otherwise expressionless dog move its tail to the right (from the tail-wagging dog’s point of view), they stayed perfectly relaxed. After if the wag strayed to the left, the dogs’ heart rate increased and they also looked anxious. Just like body language in humans conveys certain feelings and messages unconsciously which other people also unconsciously pick up and respond to, so dogs have their own behavioral patterns which aren’t made intentionally but which nevertheless get recognized.

“If you have several meetings with other dogs, and frequently their tail wagging one way is associated with a more friendly behaviour, and the right side is producing a less friendly behaviour, you respond on the basis of that experience,” says Vallortigara.

The researchers claim the findings could help vets, dog owners and animal behaviorists gain better insight into dogs’ emotions. A paper was published in the journal Current Biology.