If you can see a person or an animal, then it is possible to be seen back. It's a basic caveat they train in the military when discussing camouflage. What's more, if you suspect you're being seen, you must minimize your movements. This level of abstraction was thought to be unique to humans. It's been recently shown that ravens too are capable of imagining someone is spying on them and take greater care hiding their food, as reported in Nature Communications.

by Tibi Puiu
in Animals, Biology, Mind & Brain, News
A A

If you can see a person or an animal, then it is possible to be seen back. It’s a basic caveat they train in the military when discussing camouflage. What’s more, if you suspect you’re being seen, you must minimize your movements. This level of abstraction was thought to be unique to humans. It’s been recently shown that ravens too are capable of imagining someone is spying on them and take greater care hiding their food, as reported in Nature Communications.

University of Vienna researchers trained 10 ravens over the course of six months in a special experimental setup. These were placed in adjoining rooms separated by a window, each raven with its own space. Initially the window was left uncovered, so one of the two ravens that faced each other could see when the other was hiding food. Later, the cover was hung leaving only a small peephole which the ravens learned they could use to see or be seen through. 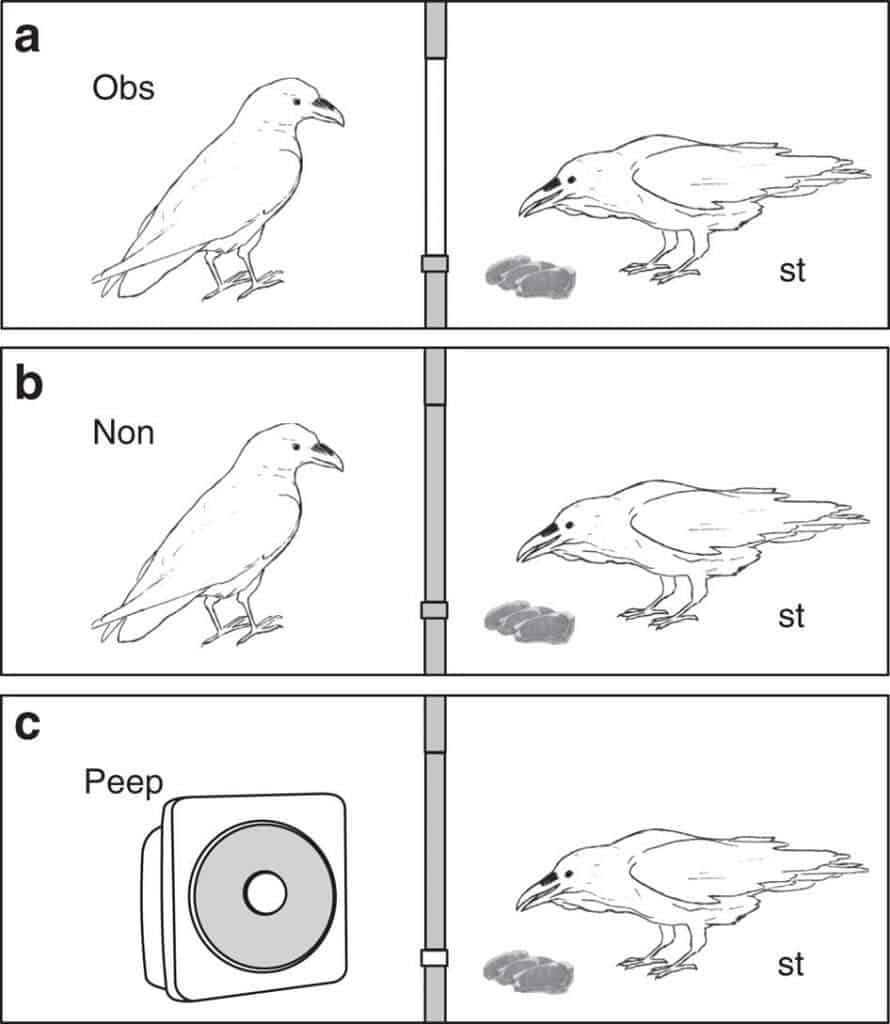 Once bootcamp was over, the researchers played an audible track which sounded like a raven was in the process of hiding food (scratching, pecking, dirt being displaced). Only when the peephole was left uncovered did the raven bother to take extra care in hiding its food. The bird hurried to hide the food and once the audio track stopped playing, the raven returned to the hiding spot to improve the concealment. If the peephole was closed the raven was careless, concluding there was no one spying anyway.

Research on chimpanzees suggests that they too can understand what others are seeing. Like other animals, they do so by studying “gaze cues” like head and eye movements. It’s not clear whether chimpanzees or other animals can pick up these cues when they can’t actually see the face or eyes of whomever might spy them.

“This strongly suggests that ravens make generalisations based on their experience, and do not merely interpret and respond to behavioural cues from other birds,” said Thomas Bugnyar, a professor at the University of Vienna.

Ravens are very, very smart animals capable of sophisticated mental abilities, like other corvids. In one logic test, the raven had to get a hanging piece of food by pulling up a bit of the string, anchoring it with its claw, and repeating until the food was in reach. Many ravens got the food on the first try, some within 30 seconds. In the wild, ravens have pushed rocks on people to keep them from climbing to their nests, stolen fish by pulling a fishermen’s line out of ice holes, and played dead beside a beaver carcass to scare other ravens away from a delicious feast. Ravens can also imitate people or use gestures to point out things and communicate.