by Mihai Andrei
in Biology, Science
Reading Time: 2 mins read
A A
Share on FacebookShare on TwitterSubmit to Reddit

Gold prospecting’s future may very well lie in a Petri dish – a species of bacterium forms nanoscale gold nuggets to help it to grow in toxic solutions of the precious metal, according to a new study published in Nature Chemical Biology. 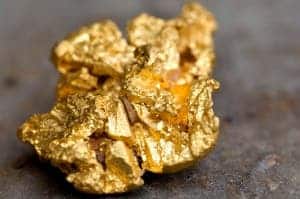 The bacteria could be used to collect gold from mine waste, says Frank Reith, an environmental microbiologist at the University of Adelaide in Australia, who works on gold-processing bacteria but was not involved in the study. Mining methods have an extraction efficiency that technically varies between 50% and 99% – though extremely high efficiencies are very rare.

At multiple sites, thousands of kilometres apart, researchers found the bacterium Cupriavidus metallidurans living in so-called biofilms on gold nuggets; biofilms are aggregates of microorganisms in which cells adhere to each other on a surface. The gold is toxic for the bacteria, so it detoxified dissolved gold by accumulating it in inert nanoparticles inside their cells. A definite conclusion on how that works exactly has not been published yet.

However, these biofilms also contained a second type of bacterium: Delftia acidovarans – relevant to this study; when Nathan Magarvey, a biochemist at McMaster University in Hamilton, Canada, and his team grew this species in the presence of a gold solution, they found that the bacteria colonies were surrounded by dark haloes of gold nanoparticles. They concluded that this bacteria somehow isolates the gold particles outside of its cell, unlike inside, like Cupriavidus.

They then analyzed the bacteria biochemically and genetically, finding the set of genes and a chemical metabolite that were responsible for precipitating the gold. Bacteria engineered without these genes generated no gold, and their growth was stopped by the mere presence of the element. They also isolated an entirely new chemical from the natural, non-engineered bacteria, that caused gold particles to precipitate out of a solution. The chemical was dubbed delftibactin.

It is actually possible that the two bacteria live in symbiosis, with one of them using delftibactin to diminish the soluble gold to levels that both species can cope with. But what’s more interesting from an economic point of view, is that this research paves the way for an entirely new wave type of microbe-assisted gold rush.