by Mihai Andrei
in Biology, World Problems
Reading Time: 4 mins read
A A
Share on FacebookShare on TwitterSubmit to Reddit

During the harvest last year, many farmers from Jordan and Mozambique reported that their plants looked nothing like what they’ve been harvesting for decades, instead turning into something like this: 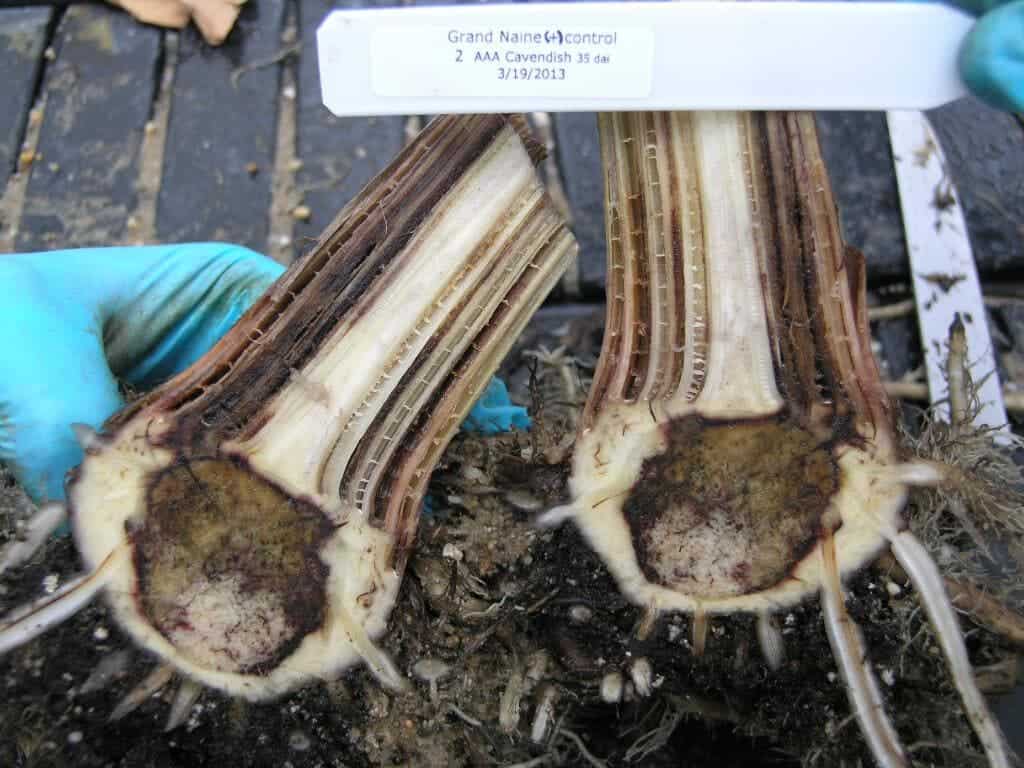 Scientists first discovered that this fungus was wreaking havoc in Southeast Asia in the early 1990s. Since then, the pathogen, known as the Tropical Race 4 strain of Panama disease, has slowly but steadily affected export crops throughout Asia. The fact that this fungus has reached Mozambique and Jordan and made its impact in Africa is extremely worrisome – especially as it’s getting closer and closer to South America, where 70% of the world’s $8.9-billion-a-year worth of exported bananas is grown. As a matter of fact, some researchers believe this strain may already be in South America – and the area is in no way prepared to deal with it.

“The story on the Mozambique situation was that workers brought over to establish the plantations—some of them were from Latin America,” he says. “And this is an insidious disease in that it can move… by soil-contaminated machinery, tools—that kind of thing.”

Meanwhile, big companies seem to downplay the impact and hazard that this fungus poses. Chiquita, the $548-million fruit giant with the world’s largest banana market share, is not worried:

”It’s certainly not an immediate threat to banana production in Latin America [where Chiquita’s crops are],” Ed Lloyd, spokesman for Chiquita, told the Charlotte Business Journal in late December, explaining that the company is using a “risk-mitigation program” to approach the potential spread.

But with today’s globalization and inter-country transports and shipments, it seems inevitable that the disease will also reach South America – be it sooner or later. The effects would be absolutely devastating – we know, because we’ve been through this before.

Well that’s not really a name, I sort of made this up, but here’s what I’m talking about. The Gros Michel banana was the type that was introduced to the American and European public. They quickly became very popular and became one of the go-to fruits. This type of banana is creamier, tastier, and overall, simply better to eat than the bananas most of us eat today – the Cavendish variety. The only reason the Cavendish banana displaced the Gros Michel was because of the “Panama virus” (Race 1) – a different, less virulent strain of the same fungus (it’s a fungus, not a virus, actually) that is now creeping in Africa. The tastier bananas were vulnerable to it, while the less tastier ones were more resistant.

Over the half-century it took to wipe out the Gros Michel, Race 1 caused at least $2.3 billion in damage (around $18.2 billion in today’s terms). But Race 4, which is what we’re dealing with now, is way more dangerous – and the overall banana production and export has also increased significantly. So why exactly is it so dangerous? 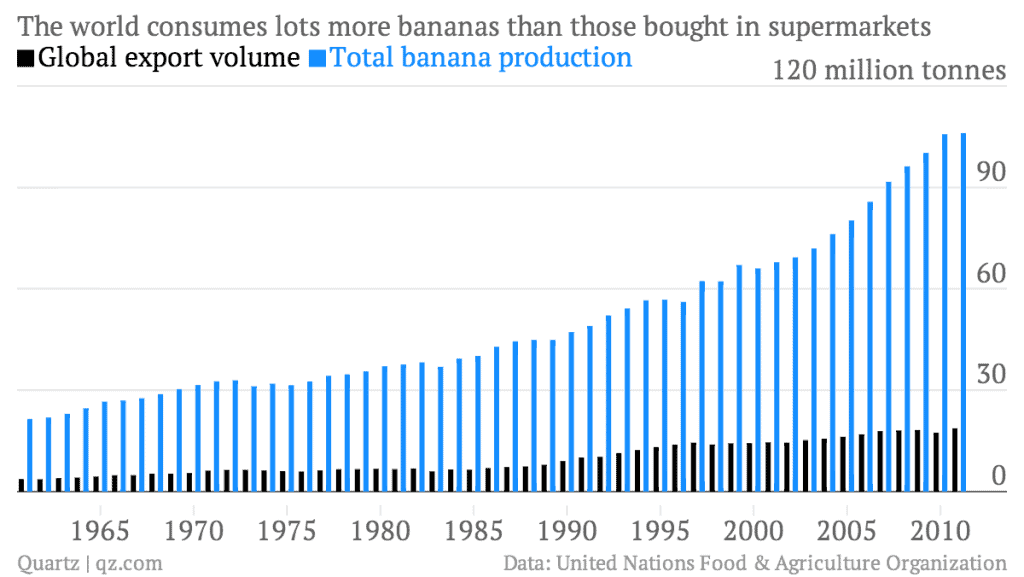 – it strikes from inside the plant. The farmers don’t get any notice – the first thing they notice is that the leaves start turning yellow. The fungus spreads from the roots through the vascular system, making it harder and harder for the plant to photosynthesize, rendering it unable to feed itself.

– nothing can get rid of it. This isn’t, by any means, the only banana disease out there. But at the moment, nothing that we have can drive it back; simply nothing! For that reason, many farmers call it the “HIV of bananas”.

– it’s stealthy and plays a long game. It can survive extensive periods of time, clinging not only to special equipment, but also to shoes, clothes, cars… you name it! All it takes is one clump of soil to spread Tropical Race 4. Also, Dead plants leave behind spores, allowing the fungus to lie dormant in the ground for decades in wait for new crops to blight. Basically, once a terrain has been touched by the plague, it’s never safe to grow bananas again on it – ever (or at least until we discover something that destroys the fungus).

We’ll see how this situation develops, but facing it sooner or later seems to be certain – and if big companies like Chiquita or Dole don’t start actively preparing themselves – we might be heading towards another Great Banana Plague. There, I’ve said it again.