Archaeologists have reported the stunning discovery of a new (old) city discovered in Honduras.

Archaeologists have reported the stunning discovery of a new (old) city discovered in Honduras. This could be an entirely unknown civilization and may actually be the legendary “White City”, also known as the “City of the Monkey God” in legends.

Spanish conquistador Hernán Cortés reported hearing “trustworthy” information on a region with “towns and villages” of extreme wealth in Honduras. He tried several times to locate them, but never succeeded. After a while, the urge to find this city (or cities) faded, until 1927, when aviator Charles Lindbergh reported seeing a “white city” while flying over eastern Honduras.

Several explorers reportedly found it subsequently, but no one revealed the exact coordinates. Academics also started to take it seriously, and also in 1927, Eduard Conzemius, an ethnographer from Luxembourg said that the city had been located by someone who got lost in the area. Interest grew but again faded for a few decades until the 1990s, when several findings were claimed to be the legendary “White City”, but none was confirmed.

The most reliable report came in 2015, when a team of archaeologists working with National Geographic found a lost  city in the Honduran rainforest. Numerous ceramic fragments and construction pieces were uncovered, and excavations are already starting at the site.

“It is a new culture, or a different culture,” said Honduras’ Institute of Anthropology director Virgilio Paredes.

The team was especially intrigued by the decorations found on jars and vases ranging from 1000 to 1500 AD. They found decorations that appeared to represent humans, jaguars, buzzards, lizards and birds, but the style was different from that of the Mayans or any other known civilization that dominated the area at the time. The area was also inhabited by the Pech and Payas indigenous groups, who long spoke of such a site. 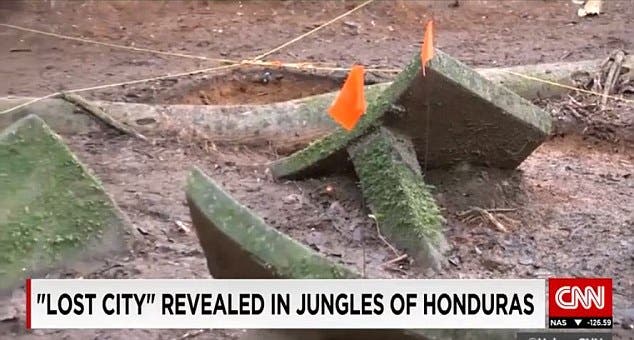 “The tops of 52 artifacts were peeking from the earth. Many more evidently lie below ground, with possible burials. They include stone ceremonial seats (called metates) and finely carved vessels decorated with snakes, zoomorphic figures, and vultures.

The most striking object emerging from the ground is the head of what Fisher speculated might be ‘a were-jaguar,’ possibly depicting a shaman in a transformed, spirit state. Alternatively, the artifact might be related to ritualized ball games that were a feature of pre-Columbian life in Mesoamerica.”

The name “White City” came from the white limestone with which the buildings were built – and again, this seems to be consistent with the bits that have been uncovered so far. Archaeologists have already identified what they believed to be a temple. Whether or not this is the White City, it’s definitely an important city, likely from an unknown civilization.

Honduras’ Minister of Science, Ramon Espinoza, said “there will be further research to gather more data, because there is no other site in Central America with a lost civilisation.”