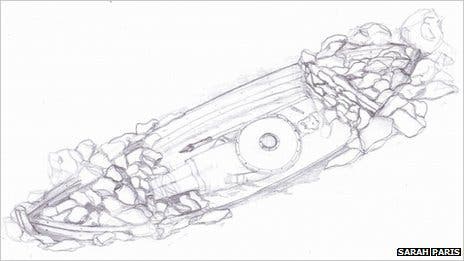 Artefacts buried along the viking suggest he was a high ranking warrior, revered and respected. According to Dr. Hannah Cobb, the “artefacts and preservation make this one of the most important Norse graves ever excavated in Britain”.

The universities of Manchester, Leicester, Newcastle and Glasgow worked and funded the operation, which was quite lengthy. The Ardnamurchan Viking was found buried with an axe, a sword with a decorated hilt, a spear, a shield boss, a bronze ring pin and some 200 rivets – the remains of the boat he was buried in.

Also, dozens of iron objects have been found, but they have yet to be identified. Viking specialist Dr Colleen Batey, from the University of Glasgow believes the ship is most likely 1000 years old. Dr. Oliver Harris, project co-director from the University of Leicester’s School of Archaeology and Ancient History explains the importance of this find:

“In previous seasons our work has examined evidence of changing beliefs and life styles in the area through a study of burial practices in the Neolithic and Bronze age periods 6,000-4,500 years ago and 4,500 to 2,800 years ago respectively. It has also yielded evidence for what will be one of the best-dated Neolithic chambered cairns in Scotland when all of our post-excavation work is complete. But the find we reveal today has got to be the icing on the cake.”