Russian archaeologists have unearthed a trove of warrior jewelry of historical significance: the tomb of a Sarmatian woman warrior who worshiped fire.

Russian archaeologists have unearthed a trove of remarkable significance: the tomb of a Sarmatian noble woman warrior who worshiped fire. 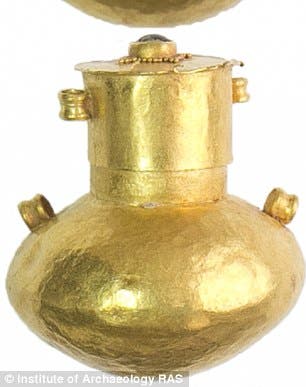 The tomb was found with more than 100 arrowheads, a horse harness, a collection of knives and a sword, which all attest she was a warrior. Alongside, they also found a gem with inscription in Aramaic, as well as both gold and silver jewelry, which indicate a high status.

The Sarmatians were nomadic people who flourished from about the 5th century BC to the 4th century AD in parts of today’s Iran and Russia, and at one point, up to Ukraine and Moldova. The Sarmatians differed from the Scythians in their veneration of the god of fire rather than god of nature, and women’s prominent role in warfare, which possibly served as the inspiration for the Amazons.

However, unlike the mythological Amazons, the real life Sarmatian Amazons had nothing against men – they fought side by side men and often got married, as is the case here. The woman was buried with someone else, likely her husband, but his tomb was looted, revealed experts from the Institute of Archaeology, of the Russian Academy of Sciences. Around them, 29 other burial mounds were discovered during the construction of a new airport serving Rostov-on-Don.

Unfortunately, most of them were already pillaged. 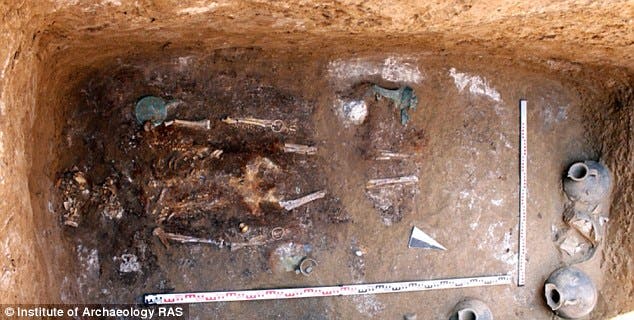 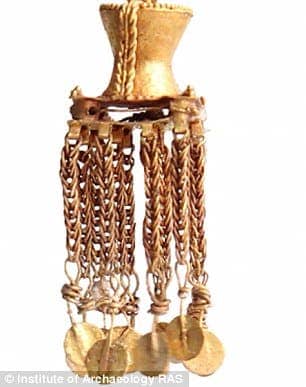 ‘Most of the burials on this site are plundered and, of course, it is great luck to find an intact one. It is interesting that there are two burials in this mound. One obviously belonged to man and was totally looted. We believe that it was a double burial of some noble Sarmatian and his wife.’

According to initial analysis on her teeth, she lived to a very respectable age, which certainly meant surviving some harsh battles. The results of more detailed analysis will be announced soon. Archaeologists added:

‘The depth of the tomb is [13 feet] four metres and it was covered with a wooden decking. At the edge of the grave pit were found the remains of a harness and more than 100 iron arrowheads.According to ancient historians, Sarmatian women participated in hostilities and this find of arrowheads is indirect confirmation of this.’

But the association of both jewelry and battle items is intriguing. This means that the woman was a warrior of high status – the wife of a warchief, or a warchief herself.

‘The collar of her dress was decorated with stamped buckles of gold leaf in the form of a stylised ram’s head,’ Mimokhod said. ‘Her sleeves were embroidered with colourful beads combined with gold triangular and hemispherical plaques.  On each hand – a gold bracelet. On her breasts were various beads, among which was a gem with a single-line Phoenician or early Aramaic inscription. At her pelvis lay a gold vial.’

‘This had a tight lid and its contents are fossilised. We will analyse this to understand what it was, but most likely it contained some incense. By her right hand were fragments of wooden dishes and a cup. At her feet there were fragments of a bronze bucket (ladle) with floral ornaments and the image of the Gorgon’s head on a stick. In the north-eastern part of the grave were located four ceramic vessels.’

To make things even more interesting, a collection of knives and a sword was hidden inside the tomb, and all these items belonged to different times: from the first century BC to the first century AD, they spanned for maybe 200 years. This means that the items were likely passed down from generation to generation, until they were finally buried with her. It’s a rather unique and surprising aspect which adds even more value to the discovery.