Archaeologists working in Bulgaria have unearthed what they claim to be the remains of the oldest prehistoric town in all of Europe; they believe the settlement existed since between 4700 and 4200 BC. 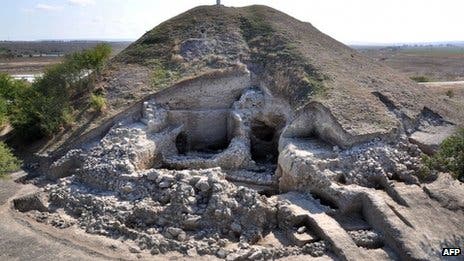 Excavation of the site has been in progress since 2005, when two story homes and three meter high walls surrounding the town were discovered, along with a small burial ground with the remains of several people. The fortified city, near the modern city of Provadia, lies about 25 km from the Black Sea, and was quite important in salt production. Archaeologists believe they extracted salt from the ground, boiled it to remove any impurities, and made bricks out of it for use and for trade as currency with other nearby tribes. During that period in history, salt was crucial not only for humans, but also for domesticated animals.

Scientists believe it housed between 300 and 350 people, divided into two classes: wealthy, mine/land owners on one side, and workers on the other side. They also found some evidence of ritual burying, with some bodies being buried unharmed, while others being mutilated, cut in half with their torsos planted upright. It’s still not clear what this was done for.

“We are not talking about a town like the Greek city-states, ancient Rome or medieval settlements, but about what archaeologists agree constituted a town in the fifth millennium BC,” Vasil Nikolov, a researcher with Bulgaria’s National Institute of Archaeology, told the AFP news agency.

Indeed, the entire community seems quite thrilled by the discovery.

“The huge walls around the settlement, which were built very tall and with stone blocks… are also something unseen in excavations of prehistoric sites in south-east Europe so far,” archaeologist Krum Bachvarov told AFP.

Similar settlements based on salt mining were also dicovered in Tuzla in Bosnia and Turda in Romania, proving the existance of civilizations which probably also mined copper and gold in the Carpathian and Balkan areas.

The latest discovery also puts into context a treasure found exactly 40 years ago at a cemetery on the outskirts of Varna, 35km away from this spot: the oldest hoard of gold objects found anywhere in the world.