Ancient mass grave discovered under a supermarket in Paris

When building constructors encounter archaeological remains (be they human or material), they have to call the archaeologists to inspect. What usually happens, unless the site has a specific importance, is that the archaeologists come, analyze and document the findings, and then move them or take them to the museum, and the construction is resumed. In some cases construction can be halted.

This was expected to be the case at the Monoprix supermarket; but scientists working at the site were stunned to discover a large collection of bodies neatly laid out in the earth of the store’s basement.

“We thought that there would be a few bones as it was the site of a cemetery but we didn’t think we would find a communal grave,” said Pascal Roy, the director of the supermarket on Boulevard Sébastopol.

Despite the countless number of skeletons in the French catacombs, it’s the first time a hospital cemetery was discovered in Paris

“We had expected to find a few human remains as we knew it was a former hospital cemetery, but nothing like as many as we have found. We’ve come across hospital cemeteries before, notably in Marseilles and Troyes, but it’s the first discovery of its kind in Paris,” Solène Bonleu from INRAP told Kim Wilsher at The Guardian. 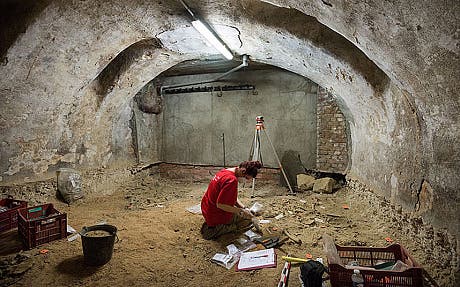 But there are even more peculiarities – the bodies were not simply thrown, like in most communal graves, but were rather arranged carefully, showing a degree of care towards the bodies.

“What is surprising is that the bodies were not thrown into the graves but placed there with care. The individuals – men, women and children – were placed head to toe, no doubt to save space,” archaeologist Isabelle Abadie added. “It suggests there were a lot of sudden deaths, but we still have to find the cause of this sudden fatal event and whether it was an epidemic, fever, famine.”

Now, the next step is to conduct DNA analysis on the bodies. Because the bodies seem to have been buried at the same time, it seems likely that they were all victims of famine or more rather plagues. Paris is known to have been massively affected by plagues in the 14th, 15th and 16th century, and DNA analysis will help reveal when these people were buried, and possibly why.