A dog skull recently found in the Altai mountains in Siberia, Russia shows the earliest signs of domestication ever to be found; but if dog was man’s best friend back then, human loyalty is questionable at best – pretty much like things are now. 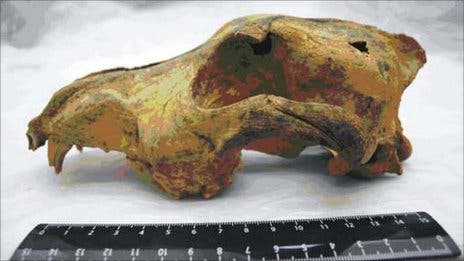 The dog lived shortly before the peak of the last ice age, and it was significantly different from both dogs and wolves today, resembling wolves skulls 31.000 years old, indicating that it was in the early stages of domesticaton, according to evolutionary biologist Dr Susan Crockford, one of the authors on the study.

“The wolves were not deliberately domesticated, the process of making a wolf into a dog was a natural process,” explained Dr Crockford of Pacific Identifications, Canada.

However, mankind was in a difficult period at the time, and this required settled human populations.

“At this time, people were hunting animals in large numbers and leaving large piles of bones behind, and that was attracting the wolves,” she said.

These dogs would have been quite useful in cleaning up left overs as well as defending against predators, but it wasn’t until the end of the ice age, 10.000 years ago, that they became crucial to humans.

“When you’ve got hunting dogs, all of a sudden it’s a game changer. Hunters with dogs are much better than sole hunters,” he told BBC News.

However, what is intriguing is that even considering these facts, people in the Altai continued without the dogs, and stopped feeding them as food became scarcer, and for several thousands of years, man and dog stopped working as a team. Thankfully however, the Siberian Samoyed bred to herd and guard reindeer, seems to have taken up where its ancient predecessor left off.