by Mihai Andrei
in Archaeology
A A

A stash of 300 year-old jewelry was unearthed by archaeologists near the biblical, ancient city of Megiddo, where the New Testament predicts the final battle of Armageddon. 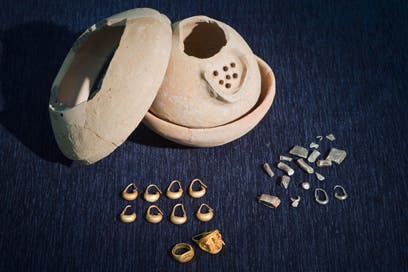 Firstly, archaeologists unearthed a jug which didn’t seem to have anything special – but after they were able to clean it, and safely open it, they found pieces of gold jewelry – a ring, earrings, and beads – dating to around 1,100 BC.

Israel Finkelstein of Tel Aviv University, who directed the digs and supervised the project, explained that aside from their direct value, the treasures also hold a huge scientific value, providing insights into the Canaanite high society. He also explains that since they found the treasure in a jug, it is likely they were hid there, for whatever reason.

“We can guess that it was a rich family, probably belonging to the ruling elite,” he said.

Tel Aviv University called the trove “among the most valuable ever found from the Biblical period,” adding that one piece in particular, a gold earring decorated with molded ibexes, or wild goats, is “without parallel.”