by Mihai Andrei
in Archaeology, News
A A

Norwegian Archaeologists have unearthed a unique Viking grave dated 1040 AD. Within the grave they found coins, a battle ax with a shaft coated in brass and a magnificent sword with intriguing silver and golden decorations. The sword almost certainly belonged to a wealthy man in the late Viking Era, quite possibly one that fought in King Canute’s (Knut) army when he attacked England, in 1014.

The sword – for hundreds of years it was a symbol of strength, and also a tool to manifest said strength. The sword gave power to the warrior, but as legends have it, the warrior could also transfer some of his strength to the sword. This particular sword was found in the village of Langeid, the municipality of Bygland, district of Setesdal in 2011. It’s an absolutely stunning work of art, embellished with gold, inscriptions and other ornamentation. Measuring 94 cm long, with a well preserved handle and wrapped with silver thread, the hilt and pommel at the top are also covered in silver with details in gold, edged with a copper alloy thread. Even as the sword itself is rusted, it still maintains its appearance of strength.

Archaeologists from the Museum of Cultural History in Oslo in southern Norway suspected right from the get go that something was special about this particular grave.

“Even before we began the excavation of this grave, I realised it was something quite special. The grave was so big and looked different from the other 20 graves in the burial ground. In each of the four corners of the grave there were post holes,” said excavation leader Camilla Cecilie Wenn of the Museum of Cultural History.

The first thing they noticed was that a grave had a roof above it, which indicates that a prestigious person was likely buried there. When they dug down in the coffin in the bottom of the grave, they started to see some (likely Viking) coins – gifts to carry on in the afterlife. But after that, the magic really happened.

“But when we went on digging outside the coffin, our eyes really popped. Along both sides, something metal appeared, but it was hard to see what it was. Suddenly a lump of earth fell to one side so that the object became clearer. Our pulses raced when we realised it was the hilt of a sword! And on the other side of the coffin, the metal turned out to be a big battle-axe. Although the weapons were covered in rust when we found them, we realised straight away that they were special and unusual. Were they put there to protect the dead person from enemies, or to display power?” 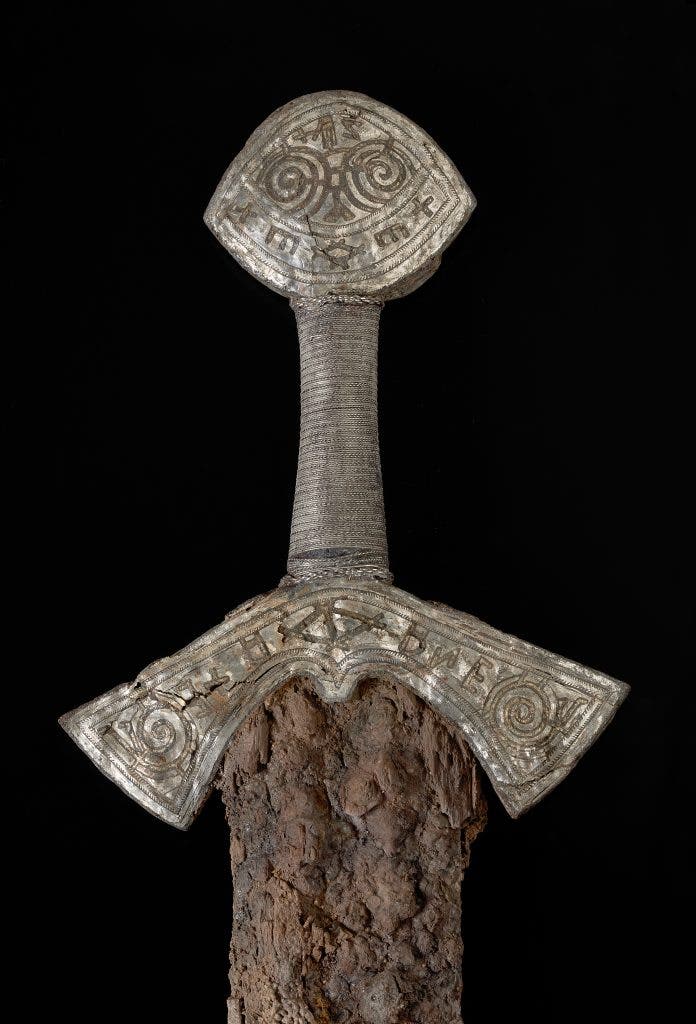 Researchers then dated the charcoal from one of the holes and came up with the year 1040 AD, but mystery still shrouds this discovery. The sword’s decorations appear to be in Latin, which is strange, they are made with gold, which is extremely rare for Viking tombs, and there is also a Christian cross decoration.

“At the top of the pommel, we can also clearly see a picture of a hand holding a cross. That’s unique and we don’t know of any similar findings on other swords from the Viking Age. Both the hand and the letters indicate that the sword was deliberately decorated with Christian symbolism. But how did such a sword end up in a pagan burial ground in Norway? The design of the sword, the symbols and the precious metal used all make it perfectly clear that this was a magnificent treasure, probably produced abroad and brought back to Norway by a very prominent man,” added Camilla Cecilie Weenn.

Although it was discovered back in 2011, no study has been published on the sword since then as researchers were thoroughly studying and detailing it. Finally, it can be seen by the public and is displayed in the exhibition called “Take it personally” – an exhibition of personal jewelry which you can find at the History Museum in Oslo.