In a meta-analysis study researchers from the University of Ontario, Penn State, and the Centre for Addiction and Mental Health found that the second to fourth finger length ratio (2d:4d) serves as an indicator of sexual orientation.

by Jason Whitaker
in Anthropology
Reading Time: 3 mins read
A A
Share on FacebookShare on TwitterSubmit to Reddit 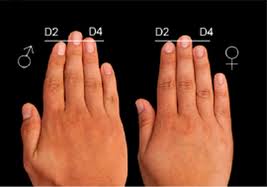 In a meta-analysis study (a study that combines the results of many studies whose hypotheses are similar), researchers from the University of Ontario, Penn State, and the Centre for Addiction and Mental Health found that the second to fourth finger length ratio (2D:4D) serves as an indicator of sexual orientation.

But why might this ostensibly menial measurement correlate with such a multifarious and prominent aspect of the human psyche? And further, at the expense of coming off myopic, if this is true, why might have no one ever noticed this effect before? After all, who’s heard of the happily heterosexual female carpenter who after accidentally shortening either her second or fourth digit in a skill-saw accident suddenly turned lesbian? Or vice versa if she were one already.

In answering these questions, we’ve to remember that, “correlation is not causation.”– thus, while these findings certainly reveal a relationship between second and fourth finger length ratio and sexual orientation, they cannot, by definition, remark on the nature of the relationship. Take a breath: You can relax around Skill-saws again.

As to why these correlations exist, the researchers have penned androgen – steroids implemented in the regulation of male characteristics – as the culprit:

Other interesting findings of the study were: sampling location had an effect, where gay men had a lower ratio in Europe and a higher one in North America when compared to Heterosexual controls in both hands, but this effect was only observed in women in the left hand; and higher proportions of white homosexual subjects tended to have more masculine second to fourth finger length ratios.

If only one thing is to be contemplated and taken from this study, it should not be the results, but rather the means by which these results where obtained. Which is to say, quite blatantly, one should understand the nature of the mathematical processes that are utilized in compiling and analyzing such data. In this case we are reminded that, one, correlation is not causation: though two phenomena may be behave identically, so as to give the impression that one is causing the other, this is not necessarily the case; and two, in many instances when a correlation is observed there is often a third factor that is responsible for the observed other two, e.g., prenatal androgen having an effect on both 2D:4D and sexual orientation; and  lastly, while meta-analysis studies can be powerful, if the protocol by which a study is either included or omitted is compromised, so that a few studies that shouldn’t have been included are included or vice versa, the results may become eschewed. This is especially worrisome since the lead authors are relying on both their protocol and the research skills of many other researchers to obtain valid data.

Or more simply: finger length ratios don’t “cause” shifts in sexual orientation, but still, please be careful when handling your skill-saw.