by Alexandru Micu
in Product Review
A A

Ah, chores. Some people hate them, and I hate them even more. So you can imagine my joy when we got a smart robotic vacuum! Now we had someone to keep the place clean while we languished around like kings. That vacuum is the ILife Beetles A4, courtesy of our friends from GearBest, and I’m here to tell you all about our experience with it.

They say don’t judge a book by its cover but this isn’t a book and it looks awesome. We got the one in metallic gray and while the overall shape and design aren’t that different from other robot vacuums on the market, it’s sleek, elegant and looks really nice.

The front half of the robot is fitted with a bumper so that when it inevitably runs into furniture on its first few runs, neither will be damaged. And just to be extra safe, there’s an added layer of cushioning in the form of a soft rubber band all around the bumper. On the underside, the A4 has its motor and driving wheels, two sets of cleaning brushes (a pair of side brushes to sweep the floor and one larger drum brush to scoop everything up) a set of IR sensors and the dust bin.

The device comes with a manual, a remote, and a spare filter and side brushes. You’ll also find its charging station and the tools you can use to clean and maintain the bot in the box.

The first thing we did was let it charge overnight.

So how does it run?

We didn’t even read the manual before our trial run, but thankfully the device is pretty intuitive to use. Once you power it up all you have to do is press the “Clean” button on the top cover and the robot will take care of the rest. We watched it cleaning the floor and bumping into stuff for about 10 minutes. It’s slim enough to get under almost any piece of furniture, and it left a very satisfying line of cleanliness behind it. We folded some pieces of paper to test what it could pick up and, apart from chunky pieces of trash or stuff that we embedded in really fuzzy mats, it got everything on the first go. The side brushes can sometimes throw pieces of thrash away but if you leave the A4 to its own devices it will eventually scoop these up too. It handles dust and pet hair very well and doesn’t blow them up all over the room, either.

The A4 does have some difficulty navigating cables — more exactly, if you happen to have a lot of cables on the floor, the robot will snatch them up with its wheels. It will register them as an obstacle and move eventually, but it will drag the cable after it. 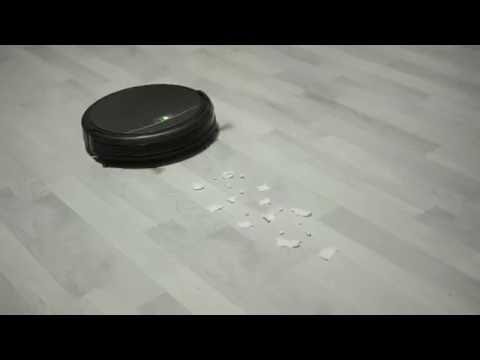 On its second run (so this would be around 15-20 minutes of use in the same room) it started to follow the outline of the furniture neatly, though by this time the cats started hunting for it and giving it all kinds of trouble — so we decided to test the IR sensors. The A4 model comes equipped with “Intelligent Drop Avoidance Induction,” a system that relies on the sensors on its underbelly to stop the robot if it reaches a high gap so it won’t fall to its doom — pretty handy. So we cleared a desk, put the bot on it and let it reach every margin a few times, but it didn’t fall once.

By now we were pretty happy with how it moved and cleaned so we wanted to test its cleaning modes. There are a lot of different settings you can pick — we settled for the scheduled auto cleaning mode and automatic re-charging. This is the most versatile mode, and it allows you to set a time each day when the A4 will leave its station and clean everything in sight, then come back to re-charge.

The robot’s battery is powerful enough to allow it to clean our (two-bedroom) flat in one go. Truthfully I don’t know how much it takes the little thing to recharge after — it does it all by itself. But if something’s bothering it it’ll let you know — the “Clean” button will flash orange if it’s low on battery or recharging, and a red flashing light means it’s run into an error. As long as the button’s green, you know it’s fine and going about its business.

Oh, and it’ll even tell you — the bot is programmed to let you know, via some seriously cute beeps, about how it’s doing — such as accepting a command or routine problems it could run into. The tones are covered in the instruction manual.

The 0.45 L (15.2 oz) dust bin is big enough that you don’t have to clean it daily. However, if you plan to use the A4 in an environment that hasn’t been vacuumed in a while, I suggest you empty the bin a few times until it’s been all over the floor. Cleaning the bin is really simple and fast. It takes me around 30 seconds to do it.

The charging IR sensors and charging station’s pins should be cleaned regularly. I do it once a week just to be sure, but it really depends on how dusty your house tends to get.

One of the more time-consuming maintenance steps is cleaning the main brush. This can become a problem if you have pets that shed hairs (and/or long hair yourself) which can get caught in the main brush. The robot will still work but it’s gonna be harder for it to scoop up all the stuff on your floor. We had to do it after the bot’s first run when it got really tangled but after that, I found that once a week is often enough. Thankfully, removing the brush is really easy and straightforward.

So would I recommend it? Yes, I would. It’s a solid design and the price-to-quality ratio is really good. Unless you have 50 cats and all your floors are covered in rugs it will get the job done. Just pick up the larger debris yourself and it will take care of the rest.

Credits to Mihai Filip Alexandru for the photographs.