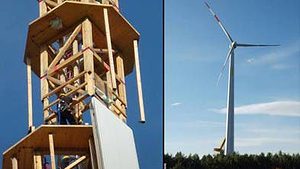 As of 2010 wind power amounted to 2.5% of the world’s energy production with an estimated 25% increase in quota each year. Yes, eolian  power is one of the cleanest forms of energy production, but like any other renewable sources, its no entirely all green. During a wind power turbine’s manufacturing hundreds of tons of steel are used, which translates in an enormous energy consumption. A German engineering company identified this issue and built a 100 meter tall, 1.5-MW timber wind turbine in Hannover, Germany.

The higher a turbine stands, the more energy it can pull since winds are stronger with altitude. However this also means that more and more materials and energy needs to be invested in a turbine, increasing its carbon footprint. Steel is the main component, but it becomes incrementally inefficient with rising heights. Wood on the other hand is a lot cheaper, has a stable market, a longer service life and can be easily recycled when discontinued.

“The TimberTower is a milestone on the way to green energy production because we use 99 per cent renewable resources,” says TimberTower managing director Holger Giebel.

With this in mind the company built the TimberTower. Standing at 100 metres high, the wooden turbine required about 300 fewer tons of sheet steel to build than a traditional turbine. The way these turbines are built and assembled also constitutes a significant advantage over steel turbines. 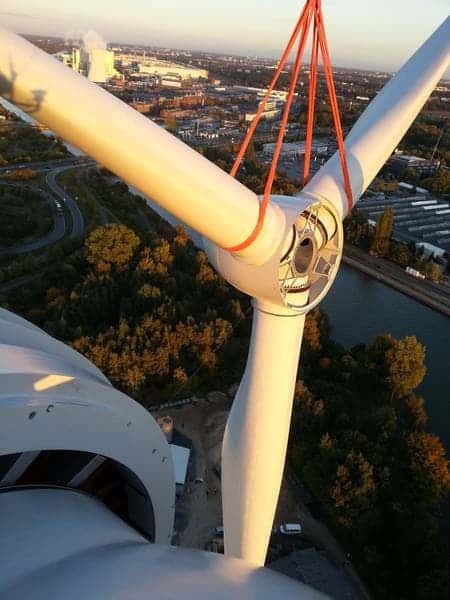 The assembly first starts off with the layering of the foundation, which can be flat or deep depending on the ground.  The laminated timber panels and surface components are then simply glued. All components are manufactured off-site and transported in 12 m (40 ft) containers for on-site assembly into a hollow octagonal tower. The finished prototype tower measures 100 m (328 ft) high, integrates a ladder and lift system, and is topped off with a Vensys 77 wind turbine. The turbine has a rotor diameter of 77 m (252.6 ft), weighs almost 100 tons (91 tonnes) and generates 1,500 kW of electricity.

“Onshore steel masts can only reach a maximum height of about 110 metres,” says Giebel. “That’s because the base of a 110-metre mast has to be 4.2 metres in diameter, and that’s the maximum size that can pass under road bridges in Germany and elsewhere. That doesn’t apply to a mast made of wood, which is assembled on the construction site, thus saving in addition enormous transportation costs.”

The finished structure extremely resembles the convention steel turbine being  slim and tapering off upward.  The tower is fire proof and  has a guaranteed service life of 40 years. The company claims that the TimberTower saves about 300 tons (272 tonnes) of sheet steel and, thanks to a treatment process that consumes less energy – about 400 tons (363 tonnes) of CO2.

Meanwhile, a 140-metre tower is also in development. The extra height should allow the turbine to generate between 30 and 40 per cent more electricity than on a conventional mast, while construction cost would be 20 per cent lower.