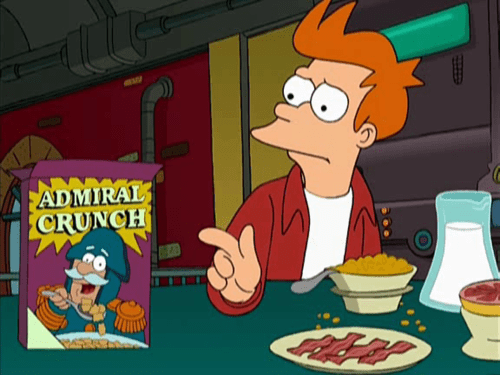 The clumsy yet beloved Futurama hero did have an extremely valid point this time. The latest product to come off a tiny Army research facility near Boston, where new food rations are developed and tested, might turn him into an oracle as well.

It might look like ordinary beef-jerky to you or me, however, the scientists from the Natick Army Lab have managed to engineer a special kind of meat stick that contains an equivalent of a cup of coffee’s worth of caffeine — more than enough to keep a hungry fighter both awake and with a full tummy while in the trenches. Obviously, army rations — or Meal, Ready to Eat (MRE), as they’re also popularly denoted — have come a very long way in the past decades of war.

“There is a lot of science that goes into this,” said David Accetta, a spokesman for the Natick Soldier Research, Development & Engineering Center. This is where every MRE item gets tested for making the cut into the final menu.

If you thought Kevlar was cool, wait until you dice your meal with an amped-up applesauce called Zapplesauce, which has maltodextrin, a complex carbohydrate which will get you fired up and eager to burn the world. Special attention to supplements seems to be a priority for the Army food researches, as a number of substances are added to make soldiers stronger and healthier. For instance, in Iraq, soldiers are regularly offered supplements which contain omega 3s and curcumin, which act as anti-inflammatories.

If during the Vietnam War soldiers’ MREs consisted of overseas frozen meat and potatoes, USA soldiers nowadays have quite the gourmet menu at their disposal. Here are just a few items on the list: chicken and pesto pasta, feta cheese and tomato, garlic mashed potatoes, salsa verde, and a strawberry-banana dairy shake. Heck, they even have a sort of instant Irish-cream coffee included in their MRE’s, which I believe might be ultimately dropped in favor of the caffeinated beef-jerky when it finally comes out. I’d love those!

All of these goodies have been made possible as a result of the Army’s food labs’ efforts, which always experiments and surveys what types of food can make a solider fit while also tasting good — an extremely important factor for the US Army, it seems. Actually, during the 90’s Operation Desert Storm, Gerald Darsch, the director of the Defense Department’s Combat Feeding Directorate, was summoned for an audience with Gen. Colin Powell, then chairman of the Joint Chiefs of Staff.

“Don’t sit down,” Darsch says Powell told him. The general held up an MRE and said, “I have two words for you: Fix it.”

And they fixed it alright. Since then, the MRE options have risen from 12 to 24, in a variety of tasty dishes. The researchers have always asked soldiers for feedback and paid closer attention not only to the way meals tasted but how they looked, too. To give you an idea, the researchers were even checking trash bins to see what kind of food soldiers were throwing away, since most often feedback forms didn’t reflect reality.

“If applesauce doesn’t look like applesauce, a war fighter is not going to eat it,” said Jeremy Whitsitt, who works in business operations at the feeding directorate.

“Nothing takes out a battalion of soldiers quicker than bad food.”