by Tibi Puiu
in News, Technology, Videos
A A

One of the most interesting projects in science today are the  BRAIN Initiative in the US and the Human Brain Project in Europe, which aim to map all the synapse connections in the human brain, or connectome, and ultimately simulate it. It’s an ambitious project with numerous challenges, but the possible benefits are well worth it. We could finally deconstruct neurodegenerative diseases like Parkinson’s or Alzheimer’s for instance, which would make finding a treatment and maybe even a cure a lot easier. The greatest insight however is a lot more philosophical: a potential definite answer to what is consciousness. It’s a question we’ve all asked one way or the other at least once in our lives, but deep down do we really want to know? I’m not sure, either. Anyway, when you’re undertaking a complex task such as mapping the human brain, you need to start simple. Analogously, you start with a worm’s brain.

A worm’s brain in a LEGO body

The OpenWorm project is an online community project that wants to  reverse-engineer C elegans or the simple roundworm. We’ve written about the roundworm simply because it’s just a lab favorite for scientists, for obvious reasons. It breeds fast, so it’s great for studying genetics, it’s practically immortal so it’s great to test basically anything, and as far as neuroscience is concerned it has a tiny brain, which again makes it perfect. C elegans only has 302 neurons and 7,000 synapses, compared to 86 billion neurons and 100 trillion synapse found in a typical human brain. But creating algorithms to simulate the functions of even such a tiny winy brain is a huge task for the scientists and programmers from the UK, Ireland, Russia and the US. They’ve proved it can be done, though.

The first map of the synaptic connections, or connectome, of the brain of C. elegans in 1986 and a refined draft in 2006. Now, the OpenWorm team not only simulated the C. elegans brain, but also uploaded the simulation into lego robot that has all the equivalent limited body parts that the worm has – a sonar sensor that acts as a nose, and motors that replace its motor neurons on each side of its body. In the video below, you see what came out of it. 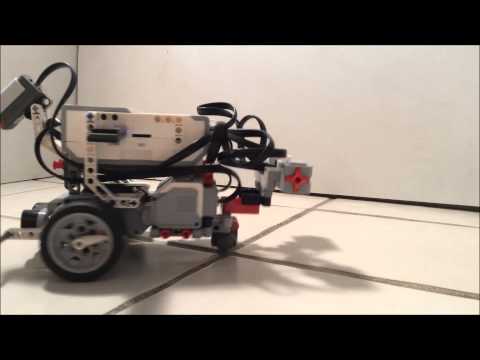 As you noticed, the robot moves forward or backward, and tripping the nose sensor grinds the robot to a halt. Ok, doesn’t seem impressive at first glance, but what sets it apart from your typical robot is that all these commands weren’t pre-programmed! The robot’s whole behavior is guided by algorithms that work with the worm’s connectome, labeling  sensory neurons, motor neurons, and interneurons which connect the two. For instance, stimulating the food sensor made the robot move forward.

Obviously, not all of the worm’s sensors were stimulated, nor simulated. The ultimate goal is to simulate the entire C. elegans brain, but for now this is truly a powerful demonstration of what can be obtained.