Star Wars inspired EV is worth a look

by Tibi Puiu
in Technology, Videos
Reading Time: 1 min read
A A

Dubbed EDWARD, this most inspiring electric two-wheeler has managed to forge a simple Star Wars geek fantasy into reality. The name stands for Electric Diwheel With Active Rotation Damping, and was developed by students at Adelaide University in southern Australia.

Very simply built, the vehicle runs on sealed lead acid batteries, which allows it to output a limited top speed of roughly 25 miles per hour,  for an usage time of about one hour. The team, made out of a group of highly talented students, says battery life may be extended by using the slosh control that stabilizes the vehicle.

Movement is highly simple, the driver only having to action the vehicle though a joystick after powering it on. Initially it proved to be highly unstable, but that was soon fixed by a stabilizing controller to make forward momentum easier. I can tell you this from experience dabbling with failed control theory experimentation that this is pretty tough to achieve. Props to the team for this.

Check out EDWARD in action in the YouTube video below. 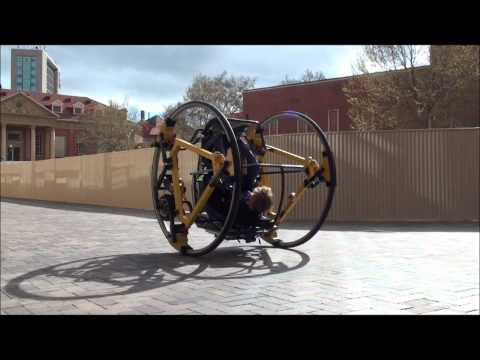