by Tibi Puiu
in Robotics, Technology

One of the most sophisticated parts of a robot is its navigation system, why requires precise sensing and processing of the information, if an anthropomorphic robot is to walk around a house safely or a rover trek through the rocky wastelands of Mars, for instance. Billions have been dedicated to this field, and naturally technological advances derived from research has been directed towards helping people with impairments as well.  A recent promising such device has been developed by scientists at the Institute of Intelligent Systems and Robotics at the Pierre and Marie Curie University in Paris, in the form of a pair of glasses equipped with cameras and sensors like those used in robot exploration. 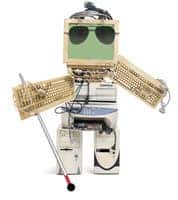 The system was first demoed at a MIT conference last month, and functions by producing a 3D map of the wearer’s environment and their position within it, after two cameras capture the surroundings and a processor analyzes the images. These are constantly updated and displayed in a simplified form on a handheld electronic Braille device. The surface of the Braille device is actually a sort of dynamic tactile map which can generate  almost 10 maps per second, with the help of the system’s collection of accelerometers and gyroscopes which keeps track of the user’s location and speed, combined with the 3-D imaging information generated by the cameras.

“Navigation for me means not only being able to move around by avoiding nearby obstacles, but also to understand how the space is socially organised – for example, where you are in relation to the pharmacy, library or intersection,” Edwige Pissaloux says.

According to the researchers, the Braille map updates fast enough for a visually-impaired wearer to pass through an area at walking speed, fact truly impressive. Hopefully these can be manufactured cheaply enough to be commercially viable in the near future.

Also, related to this device is the MIT Media Lab’s EyeRing. This remarkable device is designed to be worn by the visually impaired as a ring, which is equipped with a camera and headphones. The wearer needs only to point the ring towards a desired object and vocally command what kind of action the device needs to describe, after which the camera snaps a picture and wirelessly transmits it to a tethered smartphone which processes it. The wearer can find out the color of a shirt, what’s the price tag for a book or even how much a currency bill is worth. Check out the video presentation for the EyeRing below.