by Tibi Puiu
in Technology
Reading Time: 3 mins read
A A
Share on FacebookShare on TwitterSubmit to Reddit

Lighting has gone a long way since Thomas Edison ushered in the first mass-produced light bulbs, causing not only a lighting revolution but also sparking an electricity infrastructure boom. Still, lighting isn’t as efficient as one might expect in the 21st century, currently amounting in the US alone to 30% of the energy consumption. 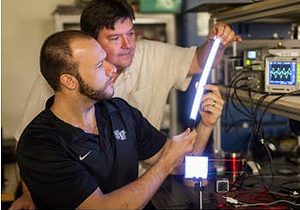 The product of novel research –  led by Professor David Carroll, the director of the Center for Nanotechnology and Molecular Materials at Wake Forest University (Winston-Salem, NC, USA) – the field-induced polymer electroluminescent (FIPEL) technology promises to plunge society into a new age of lighting. One that’s more efficient and healthy.

Compact fluorescent bulbs, which have gained popularity in recent years, emit a  bluish, harsh tint that doesn’t match the spectral resolution of the light emitted by the sun. As such, many people report headaches and eye irritation. The new FIPEL plastic light-bulbs emit light that matches the solar spectrum perfectly.

In the past few decades, the lighting industry has concentrated on converting as much heat as possible into light. To this end, LEDs have served well, however, their extremely limited when high power and intensity is required in an application. Put too much electrical strain on a LED and it will fry.

FIPEL isn’t subjected to LEDs limitations, yet its efficiency is on par with the latter and at least twice as efficient as compact fluorescent (CFL). Also because they’re made of plastic, the new technology offers greater flexibility since it doesn’t employ glass.

The FIPEL is basically made out of three layers of polymer, each attached with a minute amount of multi-walled carbon nanotubes that glow when a charge passes through them, emitting white light similar to sunlight. Each layer is a nano-engineered polymer matrix. The new plastic bulbs can be manufactured into any shape and color from huge office or storage lighting to your regular Edison socket light bulb to power a household lamp or ceiling fixture.

Professor David Carroll of the WFU team explained that their innovation is a way of creating light instead of just heat. “Our devices contain no mercury, they contain no caustic chemicals, and they don’t break as they are not made of glass,” he added.

Graduate student Greg Smith, who assisted Dr. Carroll on the project, said the team is currently working with a number of local companies to produce a plan to have the light to market in 2013.

“There is something very rewarding about building a device and seeing it light up for the first time using a system you helped develop,” he said. “I really enjoy working on such a revolutionary project. Professor Carroll has an uncanny ability to pursue new technologies and engage students in these projects. The ultimate reward for me would be to walk into a building and seeing a lighting panel using technology that I helped develop.”

In the video below, Dr. Carol describes the new technology and its potential for revolutionizing electrical lighting in the future.

FIPEL and its research have been described in a recent edition of the journal Organic Electronics.