The Nigerian prince is in trouble!

by Mihai Andrei
in Feature Post, Technology
A A

If you use email, then the odds are that at least once, you’ve encountered a “Nigerian prince.” An allegedly rich and influential person, who just needs a bit of money from you to get out of a conundrum. He’ll send you a lot of money after you help him – at least that’s how the scam goes. But why do so many scammers choose the Nigerian prince bait? A Microsoft researcher learned the answer. 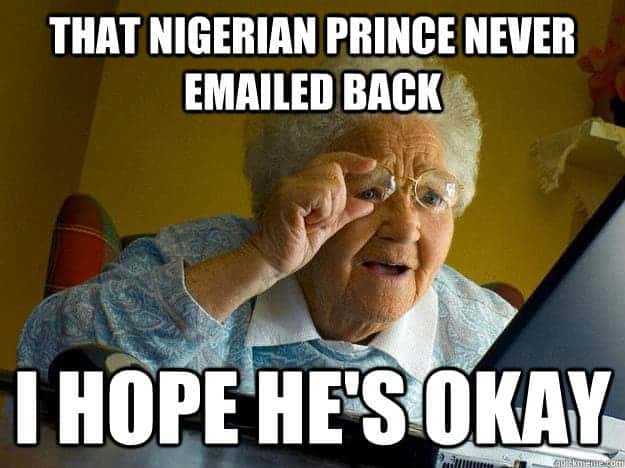 Cormac Herley, a Microsoft researcher working on data-mining for fraud and abuse, authentication, safety and data-driven security, wanted to learn the answer to that exact question. Why does the scam propose something so ludicrous and hard to believe, that an African royalty would pay you loads of money in exchange for some cash? The answer has a lot to do with false positives.

Just like scientists, scammers also get many false positives – victims that are attacked and may even reply but aren’t completely falling for the scam. In order to minimize false positives and save resources, scammers come up with the most ludicrous story, to weed out and bait only the most gullible victims. In other words, if you’re gullible enough to actually believe that a Nigerian prince is writing to you like this, then you’re gullible enough to give them money.

“We show that as victim density decreases the fraction of viable users than can be profitably attacked drops dramatically,” he wrote. “At very low victim densities the attacker faces a seemingly intractable Catch-22: unless he can distinguish viable from non-viable users with great accuracy the attacker cannot find enough victims to be profitable. However, only by finding large numbers of victims can he learn how to accurately distinguish the two.”

He didn’t say why they use Nigeria as opposed to a more obscure country, but this is likely because Nigeria is actually a pretty big country, and one that everyone knows about — adding an extra bit of bait.

So when the scammer uses a ridiculous story, like an African prince, the fact that you find it comical actually helps him. You filter yourself out, helping him focus more on the victims he can actually attack. Who would have thought Nigerian princes are so crafty?