While everyone from Google, to Tesla, to BMW is engineering driverless cars, gearing up for an impeding auto revolution, a Chinese company went directly for a niche market: driverless buses.

by Tibi Puiu
in News, Robotics, Technology
A A

While everyone from Google, to Tesla, to BMW is engineering driverless cars, gearing up for an impeding auto revolution, a Chinese company went directly for a niche market: driverless buses.

It took three years, extensive trials and collaborations with the world’s foremost experts on autonomous vehicles for Yutong to complete its pet project. Yesterday, the bus took its first public spin on the streets of Zhengzhou, China. The driverless bus completed its 20-mile ride without any incident, all while it was thrown in day-to-day traffic. According to Chinese officials from the company, the bus performed some complex maneuvers like overtaking, changing lanes and responding to traffic lights. Oh, and all packed with passengers. There was even a driver in the front seat, but as you can tell from the video reporting the story there was little worrying him. Poor fellow doesn’t realize he’ll be out of a job soon. 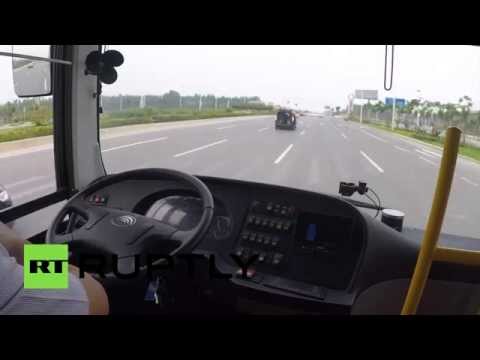 This is in effect the first driverless bus seen in action, but others will soon join. QZ reports CityMobile2, a Belgium research facility, ran tests for an electric, self-driving bus, which sounds even better. Their efforts don’t come near the Chinese driver-less bus, though, which can easily maneuver traffic. The bus comes equipped with two cameras, four laser radars, one set of millimetre wave radar and an integrated navigation system.

Unfortunately, while everyone is chasing driverless personal vehicles, little research – to my knowledge – has been invested in automated public transit. It’s a pity and a huge wasted opportunity since driverless buses might help with one of the biggest problem any busy municipality faces: traffic.  A recent report shows America will waste $2.8 trillion being stuck in traffic by 2030. A fleet of driverless cars will help curb this problem. Since these automated, they’ll always drive optimally and avoid traffic jams by constantly networking with the car next each other. Just check out these animated simulations to get a clue.

But let’s not kid ourselves, it will be ages before driverless cars become the norm. Until then, autonomous buses could have a much wider impact. According to a study previously reported by ZME Science, improving public transit could halve urban traffic by 2050 and save in excess o  $100 trillion in the US alone, also sparing 1.4 million lives every year!