by Tibi Puiu
in News, Science, Technology
A A

The way people play Battlefield or Call of Duty could change forever by bringing the heat of action to your living room. More specifically, by making action video games into real-life action as the gamer’s movements are tracked and reflected in the virtual world. The idea isn’t new, but a new 3-D positioning system developed at MIT looks so promising that finally we might be able to see a working version of such gaming possibilities in the near future.

Called WiTrack, the system uses radio-waves, instead of WiFi or image recognition like other motion tracking systems employ, to pinpoint the movement and individual actions like waving a hand or holding an object with extreme accuracy. According to the MIT researchers, WiTrack can pinpoint within 10 to 20 centimeters — about the width of an adult hand.

“Today, if you are playing a game with the Xbox Kinect or Nintendo Wii, you have to stand right in front of your gaming console, which limits the types of games you can play,” says Dina Katabi, a professor of computer science and engineering and co-director of the MIT Center for Wireless Networks and Mobile Computing. “Imagine playing an interactive video game that transforms your entire home into a virtual world. The game console tracks you as you run down real hallways away from video game enemies, or as you hide from other players behind couches and walls. This is what WiTrack can bring to video gaming.”

Previously, Katabi and her graduate student Fadel Adib unveiled WiVi, developed a system that detects humans through walls and can track the direction of their movement using WiFi signals. Similarly, WiTrack can also locate a person through walls and obstructions, but instead of WiFi it uses radio signals. This translates in a huge energy saving, since there bandwidth limitations. Other tracking systems use things like image processing which causes intense strain on computing resources, and can’t ‘see’ through walls.

“Because of the limited bandwidth, you cannot get very high location accuracy using WiFi signals,” Adib says. “WiTrack transmits a very low-power radio signal, 100 times smaller than WiFi and 1,000 times smaller than what your cell phone can transmit. But the signal is structured in a particular way to measure the time from when the signal was transmitted until the reflections come back. WiTrack has a geometric model that maps reflection delays to the exact location of the person. The model can also eliminate reflections off walls and furniture to allow us to focus on tracking human motion.”

Here’s how it works: the system is comprised of four antennas – one is a transmitter, while the other three act as receivers; the radio signals that are reflected by a person inside a room are caught by the three antennas and the travel distance is measured for each. An algorithm creates a geometrical model of the user’s location and can track both two-dimensional and three-dimensional movement using specialized radio waves.

What makes the WiTrack particularly appealing is that you can use it without actually needing to carry any hardware at hand. There’s no need to have a WiFi transmitter or anything, and users can roam spaces freely while still providing high-accuracy localization. Check the video below for a great explanation and demonstration of the WiTrack in action. 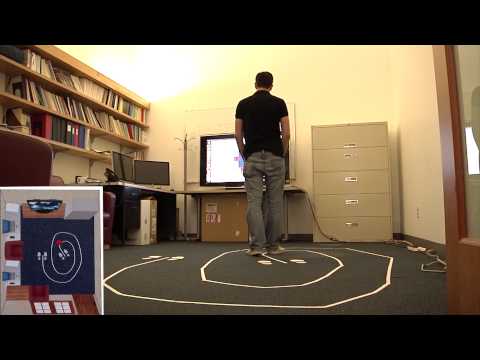 “Motion tracking has generally been accomplished by analyzing images captured from strategically placed cameras inside the room. A limitation of such systems is that they only work when the moving object is directly in the camera’s line of sight,” Bahl says. “Another problem is [that] image analysis is a computationally heavyweight operation.”

“The technology Professor Katabi and her students have developed does not have these limitations,” he adds. “Their system detects movement without requiring a huge amount of computational power, and without having to be placed inside the room. The surprising thing is that it is very accurate. There is still more research to be done, but the approach is promising.”

The researchers involved in the project say such a device for commercial use can be made relatively cheaply. Next, they plan on advancing the WiTrack system so that it can track more than one person in motion at a time.