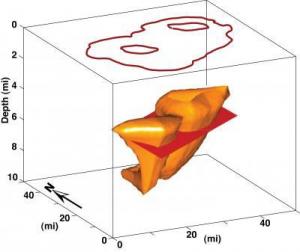 Yellowstone is being visited by over 2 million tourists every year and it spans an area of 3,472 square miles (8,987 km²) which makes it North America’s largest volcanic field. The main interest was around the Old Faithful Geyser and the Yellowstone Lake which is the largest high-altitude lake in North America and is centered over the Yellowstone Caldera.But now everybody is following the “supervolcano” which rose at a record rate since mid-2004, likely because a Los Angeles-sized, pancake-shaped blob of molten rock was injected 6 miles beneath the slumbering giant, University of Utah scientists report in the journal Science. It is produced by a “hotspot” — a gigantic plume of hot and molten rock — that begins at least 400 miles beneath Earth’s surface and rises to 30 miles underground, where it widens to about 300 miles across. The magma chamber gets supplies from there; scientists think that the magma chamber begins about 5 miles beneath Yellowstone and extends down to a depth of at least 10 miles.

But they say that we should not worry. “There is no evidence of an imminent volcanic eruption or hydrothermal explosion. That’s the bottom line,” says seismologist Robert B. Smith, lead author of the study and professor of geophysics at the University of Utah. “A lot of calderas [giant volcanic craters] worldwide go up and down over decades without erupting.”. But there is no evidence that an imminent volcanic eruption is not going to take place. Chang, the study’s first author, says: “To say if there will be a magma [molten rock] eruption or hydrothermal [hot water] eruption, we need more independent data.”.

What they know is that from mid-2004 through 2006, the Yellowstone caldera floor rose as fast as 2.8 inches (7 centimeters) per year — and by a total of 7 inches (18 centimeters) during the 30-month period. The uplift has not stopped but it is a bit slower; when rising molten rock reaches the top of the magma chamber, it starts to crystallize and solidify, releasing hot water and gases, pressuring the magma chamber. The most recent giant eruption created the 40-mile-by-25-mile oval-shaped Yellowstone caldera.