West got dusty because of people 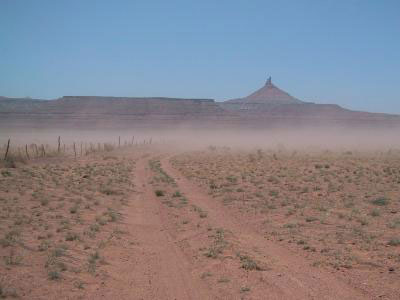 Think of the territory which was once cald the wild west; what’s the first image that pops up in your head? For most, it will probably be a dusty scenery, with some bush rolling about, an image of solitude. If you thought about that, then you were pretty close to the truth.

During the last centuries, The West has become a much dustier place. In fact, the westward “invasion” of humans have made the West five times dustier in the past two centuries than it had been in the past 5,000 years. This was pointed out by a study of lakebed sediments finds.

“There seems to be a perception that dusty conditions in the West are just the nature of the region,” said lead researcher Jason Neff of the University of Colorado at Boulder. “We have shown here that the increase in dust since the 1800s is a direct result of human activity and not part of the natural system.”

“From about 1860 to 1900, the dust deposition rates shot up so high that we initially thought there was a mistake in our data,” Neff said. “But the evidence clearly shows the western U.S. had its own Dust Bowl beginning in the 1800s when the railroads went in and cattle and sheep were introduced into the rangelands.”

The damage could be great here. Dust contains nutrients such as nitrogen, phosphorus and calcium — by-products of ranching, mining and agricultural activity — that can modify ecosystems and could also cause respiratory problems for humans. I guess it’s just nature’s way of punishing us for causing this expansion of dusty areas.