Velociraptor last meal hints that it scavenged as well

by Tibi Puiu
in Animals, Studies
A A 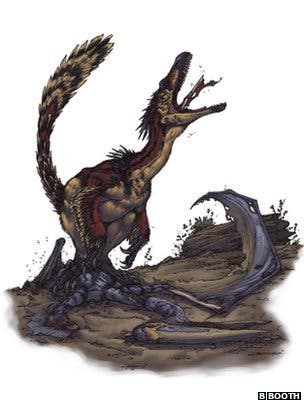 Velociraptors have been repeatedly described by paleonthologists as voracious predators, however a recent study of a 75 million year old specimen revealed that the dinosaur wasn’t picky at all, and didn’t miss the chance to pass a free meal. The conclusion came after a  pterosaur or “Pterodactyl” bone was found in its gut, suggesting that its prey was actually scavenged.

The international team of researchers discovered the velociraptor in the Gobi desert of Mongolia. Despite its extremely small size, comparable to that of a modern day turkey, the small dinosaur possessed razor sharp, sickle-shaped  talons on the second toe of each foot, which it used to slash its prey and hold it in place, trapped. Coupled with the fact that they hunted in packs, as most paleontologists believe, made them pretty fearsome. However, when presented the opportunity, the velociraptor didn’t shy away from dinning on carcasses.

“It would be difficult and probably even dangerous for the small theropod dinosaur to target a pterosaur with a wingspan of 2 metres or more, unless the pterosaur was already ill or injured,” said co-author of the study Dr David Hone, from the University College Dublin, Ireland.

“So the pterosaur bone we’ve identified in the gut of the Velociraptor was most likely scavenged from a carcass rather than the result of a predatory kill.”

The pterosaur’s bone in question is nearly 3 inches long and was lodged in the velociraptors ribcage, near where the stomach would have been located. Since the bone is very well preserved, the researchers involved in the study believe that it may had well been it last supper.

“The surface of the bone is smooth and in good condition, with no unusual traces of marks or deformation that could be attributed to digestive acids. So it’s likely that the Velociraptor itself died not long after ingesting the bone,” said Dr Hone in a statement.

Besides the lodged pterodactyl bone found in its gut, the scientists also note that they found evidence of a broken rib with signs of regrowth in the specimen, suggesting that the velociraptor was actually either injured or recovering when it died.

The findings were published in the journal Palaeogeography, Palaeoclimatology, and Palaeoecology.

Story and image via BBC Nature