Trust or not – you only need 20 seconds

by Tibi Puiu
in Mind & Brain, Psychology, Studies
Reading Time: 3 mins read
A A
Share on FacebookShare on TwitterSubmit to Reddit 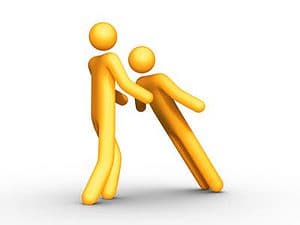 Humans are hot-wired to scan other people in their surroundings, and determine whether their trust worthy or not, all by reading various signals like body language, facial expression etc. – the so called first impression. A team of researchers from UC Berkeley have now conducted a study which claims that some people are genetically predisposed to be trustworthy, and you only need 20 seconds to tell.

“It’s remarkable that complete strangers could pick up on who’s trustworthy, kind or compassionate in 20 seconds when all they saw was a person sitting in a chair listening to someone talk,” said Aleksandr Kogan, lead author of the study and now a postdoctoral student at the University of Toronto at Mississauga. He conducted the study while at UC Berkeley.

For their study, the researchers interviewed two dozen couples, which they asked to share their griefs and sorrows, an important emotional factor meant to test empathy abilities. The participants also had DNA samples collected from them. Each of the participants had to take turns speaking, while the camera was placed only on the person whose turn was to listen.

They then showed this footage to a group of observers, with absolutely no connection to the couples, in the form of a 20 second video clip. The observers where then asked to rate which seemed most trustworthy, kind and compassionate. What the researchers found was that the highest rated persons also showed a particular variation of the oxytocin receptor gene known as the GG genotype. Oxytocin is best known for its roles in sexual reproduction, in particular during and after childbirth. Also known as the “love hormone”, oxytocin is secreted into the bloodstream and the brain, where it promotes social interaction, bonding and romantic love, among other functions. The more you have it, the more social aware and emphatic you are.

“People can’t see genes, so there has to be something going on that is signaling these genetic differences to the strangers,” Kogan said. “What we found is that the people who had two copies of the G version displayed more trustworthy behaviors – more head nods, more eye contact, more smiling, more open body posture. And it was these behaviors that signaled kindness to the strangers.”

This research holds a particular importance for people who are innately social unaware or unsympathetic, as scientists believe gene therapy might be developed. However, at the same time they warn that there isn’t a secret gene that can make a person shine with karisma from birth, instead a combination of factors, both genetic and non-genetic, at play.

“What ultimately makes us kind and cooperative is a mixture of numerous genetic and non-genetic factors. No one gene is doing the trick. Instead, each of these many forces is a thread pulling a person in one direction or another, and the oxytocin receptor gene is one of these threads,” Kogan said.

The UC Berkeley researchers’ study was published in the journal Proceedings of the National Academy of Sciences.