by Tibi Puiu
in Biology, Studies, World Problems
Reading Time: 3 mins read
A A
Share on FacebookShare on TwitterSubmit to Reddit 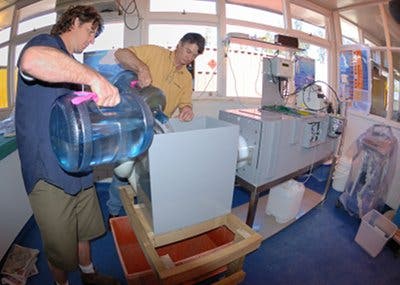 Shark populations have declined at a rapid pace during the past few decades, with a significant number of species being threaten by extinction. Considering the shark is a fairly sensitive species because of its difficult breeding cycle, makes it even more vulnerable. Thus, researchers looking to develop effective breeding programs have to take it up a notch and come up with innovative solutions. Such a solution has been put in place by biologists from Port Stephens Fisheries Institute, in the New South Wales, who have successfully managed to breed baby sharks in an “artificial uterus.”

The artificial uterus is actually a complex array of tanks, tubes, and fluid-exchange systems, developed part of a project to increase the frivolous numbers of the grey nurse shark.  The species is regionally endangered off the east coast of Australia, and is listed as vulnerable on the IUCN Red List.

The shark has one of the most curious breeding cycles. It has two separate whooms in which as much as 40 embryos start to develop. It’s not for one whole year that the first baby shark leaves the womb, however they become feracious predators long before that. When they’re about two months old, the shark embryos own yolk sacs go dry, and so go hungry. Left without food, they start gobbling at each other, until only one remains alive – the fittest of them all. In one year, a shark can breed only two younglings, one from each womb.

Although the baby sharks are three feet long and experienced hunters by the time they get out of the womb, the 1 year long gestation period and another 1 year in average recuperation period between makes them very vulnerable.

“I was essentially charged with coming up with a breeding program and it is a tall task,” said Otway. “The only way to do it is to bypass the cannibalistic phase.”

So what the biologists from New South wales did was to devise a breeding system complex aquarium, with air vents, bacterial filters, peristaltic pumps, observation ports, water exchange systems and a host of monitoring sensors in which the embryos were bread to mature size isolated from their peers.

The system was tested with wobbegong sharks (Orectolobus ornatus), which have a similar gestation period to grey nurse sharks, but are smaller, less threatened and easier to keep in captivity. With this setup, Otway and Ellis brought six embryos to term, taken from one euthanized female captured by divers, who spent the final 18 days before birth in the artificial uterus. Their lab work proves that a similar setup can be made for the grey nurse shark as well, however the researchers argue that the hassle might be too grate for funding to support it.

“We proved, I think, that this concept could work. But it would be incredibly expensive, a few million dollars at least, to fully develop this for grey nurse sharks,” Otway said. “I’m not sure the cost would be worth the benefit.”

The paper describing the aritficial shark uterus has been published in the journal Zoo Biology, Sept. 8.