One landmark study suggests that the tundras are shifting their role as a result of climate change turning into carbon sources, with a net positive release of carbon into the atmosphere.

Though tundra covers only 8% of the planet’s surface, the frozen soil of the Northern Hemisphere store twice as much CO2 as there is in the atmosphere. Like an old freezer than needs deicing, the tundras release some of this carbon into the atmosphere during the winter and stores the carbon during the summer. The net balance is thought to be negative, so tundras are carbon sinks, much like the oceans, averting further warming in the atmosphere. One landmark study suggests, however, that the tundras are shifting their role as a result of climate change turning into carbon sources, with a net positive release of carbon into the atmosphere.

The Arctic is warming faster than any other biome on Earth. In this sense, the Arctic represents the “canary in the coal mine” for understanding how biomes around the world may respond to climate change. In the tundra, the carbon exchange between the ground and the atmosphere is essentially governed by two processes: plant photosynthesis and microbial respiration. On one hand, CO2 from the atmosphere is absorbed by plants and incorporated  during the process of photosynthesis (storage). On the other hand, carbon is  released back into the atmosphere through decomposition as CO2 and other greenhouse gasses.

Decomposition is a fundamental process of energy and nutrient cycling that connects living and dead organisms. When a biological being dies (plant, animal), it is broken down into its components by other organisms called decomposers, like bacteria, worms, fungi, termites and the like. When these organisms consume the dead organic matter, some of this matter is released into the ambient atmosphere as carbon dioxide (CO2) and methane (CH4). Then, other components like nitrogen and phosphorus are stored into the soil — these are essential to plant growth.

Because the tundra is so freaking cold, respiration is very slow, so it accumulates organic matter (lots of carbon). But the Arctic is warming — fast — the strongest trends being found in northern Eurasia and northwestern North America (including Alaska). As per seasonal changes, warming is strongest in winter and spring, when it amounts to as much as 2–3°C per decade since 1960 in the areas of greatest warming. With this in mind, some scientists suggest this causes accelerated decomposition on the upper layers of what would have previously been frozen or near-frozen earth, releasing the greenhouse gas into the atmosphere. In effect, this turns a carbon repository into a carbon emitter.

Previous research hasn’t been able to confirm this hypothesis, finding carbon storage from photosynthesis outweighs losses through respiration. These studies may paint an incomplete picture though, warns Elizabeth Webb, an ecosystem ecologist at the University of Florida in Gainesville and lead author of the new study. Most research has been done in the short summer season when there is plentiful sunlight to drive photosynthesis.

Webb and colleagues measured the net carbon flux of tundra in Alaska’s interior during the winter of 2008-2009 through the winter of 2012-2013. Snow fences were raised meant to gather snow on one side of the barrier.  On the leeward side of the fence, snow accumulates, insulating the soil below and simulating what would happen under warmer temperatures. On the windward side, no additional snow accumulates, showing what would happen if temperatures remain the same.

At the end of the study, the team reported a net loss of CO2 from the soil to the atmosphere. The amount of CO2 leached into the atmosphere as a result of rising temperatures increased by anywhere between 9 to 36 percent, depending on the measurement method used. No matter what tool they used to gauge the carbon loss, however, the team found the there was a net loss of carbon.

“I can’t say if that is a tipping point or not, but I can say that in terms of climate change, it’s not a step in the right direction,” Webb said for AGU.

“As climate change progresses, we’re going to see longer shoulder seasons – the fall [and spring] will be lasting longer and the winter will be shorter,” Webb said. “So we need to be able to figure out what’s happening during that time.”

We can’t draw definite conclusions yet. What the researchers registered may have been an anomaly. Also, these measurements were made at just a couple of sites in Alaska. If this is true, however, across the whole or much of the Northern latitude, then we’re in for a lot of trouble. 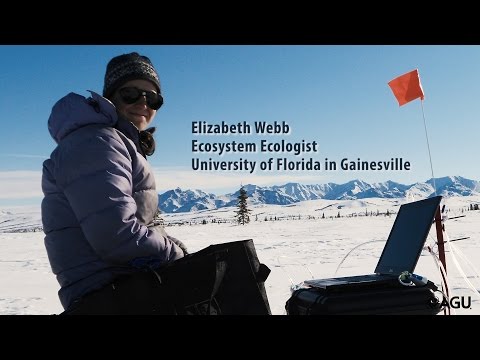