Religion about to go extinct in nine countries

by Mihai Andrei
in Mathematics, Studies

Religion is nowadays an extremely touchy subject; if you ask religious people about non religious people there’s a good chance you will get a pretty nasty response, something involving a kind of hell and divine punishment, while if you ask the other group, probably some bad words will probably come up. If you ask me, everybody has the right to believe whatever the hell they want, as long as they don’t try it to impose to other people, but it seems religion is on a downhill slope these decades. 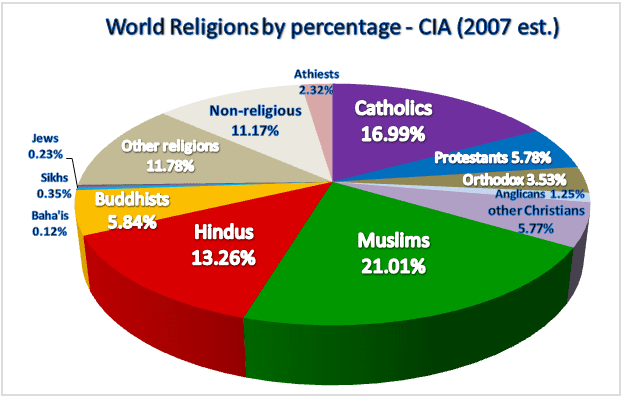 This was also the conclusion of a study that analyzed data from nine countries and found that religion is an ‘endangered species’ in all of them. The countries in case, Australia, Austria, Canada, the Czech Republic, Finland, Ireland, the Netherlands, New Zealand and Switzerland were studied using a mathematical model which attempts to understand and extrapolate the interplay between the number of religious respondents and the social motives behind being one.

The results were published at the American Physical Society meeting in Dallas, US and they seem to indicate that religion will probably die alltogether in these countries, in a matter of time. The mathematical model behind it is extremely performant, albeit not innovative; it has also been used by one of the team members Daniel Abrams of Northwestern University, to understand the decline in lesser spoken language throghout the world.

“The idea is pretty simple,” said Richard Wiener of the Research Corporation for Science Advancement, and the University of Arizona. “It posits that social groups that have more members are going to be more attractive to join, and it posits that social groups have a social status or utility. “For example in languages, there can be greater utility or status in speaking Spanish instead of [the dying language] Quechuan in Peru, and similarly there’s some kind of status or utility in being a member of a religion or not.”

“In a large number of modern secular democracies, there’s been a trend that folk are identifying themselves as non-affiliated with religion; in the Netherlands the number was 40%, and the highest we saw was in the Czech Republic, where the number was 60%.”

In all of the countries, the results seemed to indicate that religion is heading towards extinction, but that doesn’t mean that it’s necessarily true; the team are working on ways to improve their model, in order to get more accurate results.

“Obviously we don’t really believe this is the network structure of a modern society, where each person is influenced equally by all the other people in society,” he said.

However, it’s definitely obvious that the results are at least suggestive, and it would be interesting to see this kind of model applied to other countries as well.

“It’s interesting that a fairly simple model captures the data, and if those simple ideas are correct, it suggests where this might be going. Obviously much more complicated things are going on with any one individual, but maybe a lot of that averages out.”