by Tibi Puiu
in Environment, Studies
Reading Time: 2 mins read
A A
Share on FacebookShare on TwitterSubmit to Reddit 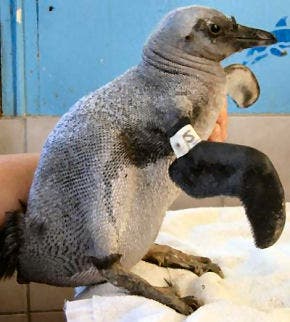 In the last couple of years researchers have been confronted with a peculiar case in the Atlantic penguin colonies as an increased number of penguin chicks have been found to be suffering from what seems to be a feather loss causing disorder. Scientists have been studying the phenomena for a few years now, but have yet to come to a final valid conclusion as to why this is happening

“Feather-loss disorders are uncommon in most bird species, and we need to conduct further study to determine the cause of the disorder and if this is in fact spreading to other penguin species,” said report author P. Dee Boersma of the Wildlife Conservation Society (WCS).

Boersma is a prominent scientific figure in the scene who has been studying the majestic Magellan penguins for three decades now, and this unknown affliction doesn’t cease to baffle him either. He says that the first featherless cases appeared around 2006 in Cape Town, South Africa among an African Penguins colony. During that year, approximately 59 percent of the penguin chicks lost their feathers, followed by 97 percent of the chicks in 2007, and 20 percent of the chicks in 2008. On the other side of the Atlantic, WCS reserachers have reported similar issues in four different sites along Argentina’s coastline.

Studies show that the featherless chicks grew more slowly than feathered chicks, and are also smaller than their feathery counterparts. Scientists believe that this is due to increased energy spent in thermoregulation in the absence of an insulating coat of feathers.

“We need to learn how to stop the spread of feather-loss disorder, as penguins already have problems with oil pollution and climate variation,” concluded Boersma. “It’s important to keep disease from being added to the list of threats they face.”

As reported in the journal Waterbirds.