by Tibi Puiu
in Remote sensing, Space, Studies
Reading Time: 2 mins read
A A
Share on FacebookShare on TwitterSubmit to Reddit

The Hubble telescope has captured through an innovative technique, which harnessed light bent from a distant galaxy in a optical lens-like manner, a  direct image of a disk of matter surrounding a black hole.

The disk, made out of gas and dust, slowly swirls around a giant black hole’s center gradually getting consumed. Powered by the disk of matter, huge energy bursts of energy are triggered from within the black hole’s center – these phenoma is typically known as a quasar, the most energetic objects we’re currently aware of in the Universe.

These disks of matter are very well obscured, buried away in distant galaxies from the early Universe, making them impossible to image directly. However, scientists were able to picture the forming quasar with the help of a ancient galaxy which happened to be between Earth and the quasar. The mass of the enormous galaxy bent light from the quasar and directed it toward Hubble, allowing for the light’s redshift to be studied through a process called gravitational lensing. 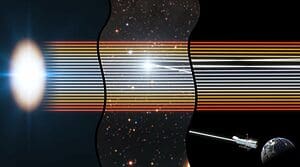 Researchers had to overcome a number of difficulties, like the fact that dust and gas from the galaxy were making imaging impossible, which forced them to look for subtle changes in the color of the light being output by the quasar. In the published paper, in the latest issue of Astrophysical Journal, the authors showed that the quasar was 18.5 billion light-years away and measured in size  between 60 and 180 billion miles across.