Can a butterfly (or moth) remember life as a catterpillar? 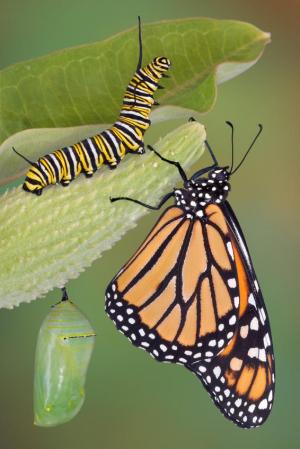 As you know (or at least should know), butterflies and moths are known for their metamorphosis from catterpillars to their adult form. This radical change involves not just a change of look, but it also includes changes in lifestyle, diet, sensorial impulses and many many other differences. So it would seem very probable that the buttefly has no memory whatsoever of its life in the previous form.

Well, as strange as it would seem, scientists at Georgetown University found out that tobacco hornworm caterpillars could be trained to avoid particular odors delivered in association with a mild shock; and when it emerged from that form, it still avoided the odors, showing larval memory. This is in fact the first study to prove beyond a doubt that associative memory can survive metamorphosis in Lepidoptera.

“The intriguing idea that a caterpillar’s experiences can persist in the adult butterfly or moth captures the imagination, as it challenges a broadly-held view of metamorphosis — that the larva essentially turns to soup and its components are entirely rebuilt as a butterfly,” says senior author Martha Weiss, an associate professor of Biology at Georgetown University.

“Scientists have been interested in whether memory can survive metamorphosis for over a hundred years,” says first author Doug Blackiston.

While most studies around insect memory have focused on social insects, such as honeybees and ants, this particular laboratory focuses on butterflies, praying mantids, and mud-dauber wasps. This sounds quite interesting, but really useless. Well, it’s not! It can actually help scientists identify the signals that are required to direct a cell to develop into a neuron and determining how the complex human central nervous system evolved.