Sleep quality gets better as we age

by Tibi Puiu
in Health & Medicine, Studies
A A

While there’s a common assumption that once with old age, sleep quality tends to deteriorate, a recent study published in the journal Sleep suggests that the opposite is actually true. Thus, the older you are, the higher the chances of you having a good night’s sleep. 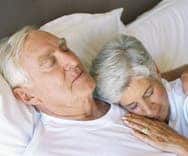 The conclusion came after more than 150,000 adults  were telephone surveyed. A study conducted on the phone might seem like bad science, however the researchers at Center for Sleep and Circadian Neurobiology at the University of Pennsylvania argue that while previous studies employed  technology that can measure sleep duration and disturbance in study volunteers, they failed to assess the volunteer’s own opinion of how rested they felt after sleeping. The sheer volume of correspondents makes it quite accurate as well, statistically-wise.

Besides their sleeping habits and how rested they felt after a night’s sleep in general, the correspondents were asked about their race, income, education, mood and general health. Bad sleep is primarily associated with poor health or psychological stress, including depression. For the study to become relevant to its purpose, that of assessing sleep quality relative to age, all the other factors had to be adjusted. In the end, a distinct pattern emerged.

What the researchers found that poor sleep complaints lowered in older subjects, with the lowest number of complaints coming from those passed their 70s. Middle-aged correspondents, however, seem to make an exceptions, as the researchers conclude that people in their 40s had reported a poorer sleep quality.

“These results force us to re-think what we know about sleep in older people – men and women,” Dr Michael Grandner said.