In the culmination of 15 years worth of painstaking research work related to retina implants, scientists from Germany and Hungary have for the first time demonstrated that a light sensitive electronic chip, implanted under the retina, can restore useful vision in patients blind from hereditary retinal degeneration. 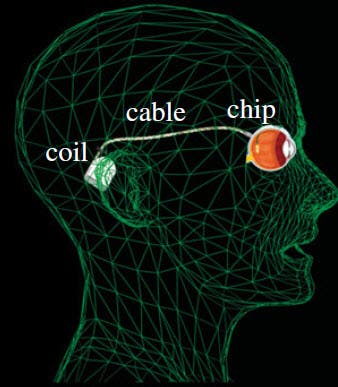 As part of the research, nine persons previously completely blind have had their vision partially restored. They can now identify objects in their surroundings, and have become independent allowing them to live a life closer to normal. One participant in particular showed extraordinary improvements, after he was able to discern 7 shades of grey, read the hands of a clock and combined the letters of the alphabet into words.

The  3mm x 3 mm implant has 1500 pixels or just as many independent microphotodiode-amplifier electrode elements. It is meant to be surgically implanted below the fovea (area of sharpest vision in the retina), and is powered  by subdermal coil behind the ear.

“So far, our approach using subretinal electronic implants is the only one that has successfully mediated images in a trial with freely moving blind persons by means of a light sensor array that moves with the eye,” the scientists said.

“All the other current approaches require an extraocular camera that does not link image capture to eye movements, which, therefore, does not allow the utilization of microsaccades for refreshing the perceived images.”

In people suffering from hereditary retinal degeneration, the photoreceptors in the retina progressively degenerate, often causing blindness in adult life. Unfortunately, there is no viable treatment that can prevent this from happening, however forefront research like this might offer them a chance to a normal life.

Patients implanted with the device now posses a diamond-shaped visual field of 15 degrees diagonally across chip corners. This is a poor vision by all means, magnified by the fact that the visual field is so tiny, but when compared to the pitch black darkness the blind were thrown in, eyesight restoration, partial as it is, becomes nothing less than godsend. In the video below for instance, a study participant needed 2 minutes to recognize and read a succession of letters that formed the word “MIKA”. Remarkably, the patient read it correctly and signaled the researchers that they’ve spelled his name, Mikka, wrong – of course, this was made on purpose.

Findings were reported in the journal Proceeding of the Royal Society.

The work was made possible thanks to a long-standing collaborative effort between the University Eye Hospitals in Tübingen and Regensburg, the Institute for Microelectronics in Stuttgart (IMS), the Natural and Medical Sciences Institute (NMI) in Reutlingen as well as the Retina Implant AG and Multi Channel Systems (MCS).