Prehistoric snake shows what the word “gigantic” was created for 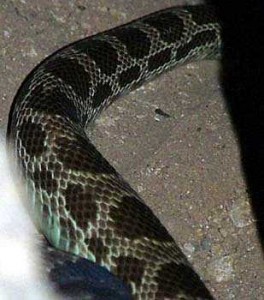 And when I say that snake was big that’s how it was- really BIG. It had the length of a regular school bus and weighed about as much as your family car. Fortunately for us though, this prehistoric “dragon” lived long time ago, about 6 million years after another teethed nightmare became extinct- the T-Rex.
And talking about the T-Rex, the partial skeleton of a Titanoboa, as it was named, proved to be just as long as Sue, the dinosaur which is displayed at Chicago’s Field Museum. The 45-feet-long snake was discovered in Columbia by an international team of scientists and is now at the University of Florida for further study.
Apparently, nature seems again to prove to all of us that it has much more to offer than Hollywood does. According to the researchers, the snake that threatened to make Jennifer Lopez its lunch in the movie “Anaconda” was just a youngster compared to the creature discovered by them, which would literally have trouble squeezing through a regular door.

The discovery sheds new light on what happened after the dinosaurs had disappeared. Certainly, our planet did not become a friendlier place at all. The scientists have discovered primitive crocodiles and giant turtles, which were probably preyed by the Titanoboa. Moreover, the size of the snakes proves that the temperatures were quite high at that time if it allowed them to grow so much. Being cold-blooded animals, their size is determined by the environment, so they must have had very favorable conditions. This phenomenon is still to be seen today as the biggest reptiles live close to the tropics, their size decreasing as they get nearer to the poles.
According to researchers’ calculations, the mean annual temperature at equatorial South America was 91 degrees Fahrenheit, which is 10 degrees more than now, during the Paleocene Epoch, when the giant snake lived.
Finding the fossils was no easy job because of the lack of exposed rock at the tropics. However, a coal mine proved to be…a gold mine for the paleontologists. After they were gathered and brought to the University of Florida, other problems began. Firstly, the species had to be identified and then by using calculi and estimations, the length, body mass and width were established based on the vertebrae.
The discovery proved to be very exciting for everyone as it helped scientists understand more about both snakes and life at tropics, not to mention the fact that it brought more information to the debate related to how big snakes could really get. Apparently, bigger than in anyone’s wildest dreams.

Source: The University of Florida