by Tibi Puiu
in Alternative Medicine, Health & Medicine, Research
Reading Time: 2 mins read
A A
Share on FacebookShare on TwitterSubmit to Reddit

Cancer is currently responsible for 13% of all worldwide deaths, and although remarkable progress has been made in treating this vicious disease, we’re still a very long way from curing mankind of this pest. Even the latest news from around the world is that cancers like mesothelioma and other harder to find cancers are running rampant. As if cancer wasn’t bad enough, current treatments, like surgery and chemotherapy, are incredibly painful, besides the fact they do not guarantee a cure. Chemo, in particular, is very rough since the treatment inherently involves the killing of healthy cells, along with cancer cells. However, a novel approach, elaborated by scientists at the National Cancer Institute (NCI) in Bethesda, Maryland, that involves the elimination of cancer cells and shrinkage of tumors without damaging the surrounding healthy cells shows signs of great promise.

Called photoimmunotherapy (PIT) treatment, the procedure is fairly simple. Various types of cancers cause a certain amount of antibodies to be produced in excess, generally different for each type of cancer. A special dye is applied to the target area of the body, which sticks to these antibodies. A near infrared light is applied to the dye which burns up, in the process exclusively killing off the cancer cells its attached to. 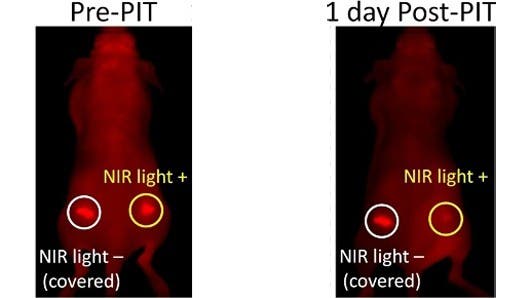 “Normal cells may have a hundred copies of these antibodies, but cancer cells have millions of copies,” says Hisataka Kobayashi, chief scientist in Molecular Imaging at NCI. “That’s a big difference.” The result is that only cancer cells are affected by the light-activation, leaving surrounding tissue unharmed.

The technique not only renders results, but also provides for better monitoring through fluorescence imaging that renders the dye. After one single day of treatment, fluorescence dramatically declined in the lab mice.

Don’t get your hopes too high just yet. The treatment is great for identifying remaining cancer cells after a tumor extirpation procedure and even clean them up, however it’s far from being suitable for large tumors, not yet at least. Photoimmunotherapy kills off too many cells at once, flushing the body with toxins and leading to cardiovascular problems.

The study was published in the journal Nature Medicine.