by Tibi Puiu
in Diseases, Health & Medicine, Research
A A

Researchers at University of Cincinnati have developed an unique all-in-one nanostructure: it can both diagnose cancer cells and deliver its drug payload for treatment at the same time. Other nano carriers are typically built to serve one of the two purposes, not both at once.

To achieve this, the researchers fashioned a double-sided surface, called a Janus surface, which serves in cancer cell detection, while wrapping anti-cancer drugs in a porous interior. The nano carrier will be useful for: 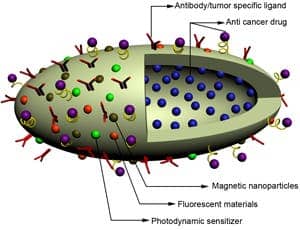 We’ve showcased a number of nano carrier ideas in the past, be them nanorobots made out of DNA which seek and kill cancer, smart microcapsules that deliver anti-cancer drugs or even huge microbots that can deliver more payload than ever before. These are of great interest to scientists because they can selectively target cancer cells, hitting tumors locally without affecting the rest of the body, unlike chemotherapy. Because they’re so small, often no larger than a cell, there are only so many components you can put in a nano carrier which makes  both cancer detection and drug-delivery materials difficult to put together.

The Janus nanocomponent, on the other hand, has functionally and chemically distinct surfaces to allow it to carry multiple components in a single assembly and function in an intelligent manner.

“In this effort, we’re using existing basic nano systems, such as carbon nanotubes, graphene, iron oxides, silica, quantum dots and polymeric nano materials in order to create an all-in-one, multidimensional and stable nano carrier that will provide imaging, cell targeting, drug storage and intelligent, controlled drug release,” said Donglu Shi, professor of materials science and engineering at UC’s College of Engineering and Applied Science (CEAS, adding that the nano carrier’s promise is currently greatest for cancers that are close to the body’s surface, such as breast and prostate cancer.

As far as I know, anti-cancer nano carriers have yet to enter clinical trials on humans and this might actually take a while. If ultimately found effective, though, structures will provide earlier, faster and more accurate diagnosis at lower cost than today’s technology. Also, because of their targeted drug delivery, this would mean the torments of chemo might finally come to an end.

This research, titled “Dual Surface Functionalized Janus Nanocomposites of Polystyrene//Fe304@Si02 for Simultaneous Tumor Cell Targeting and pH-Triggered Drug Release,” will be presented as an invited talk on Oct. 30, 2013, at the annual Materials Science & Technology Conference in Montreal, Canada.