by Tibi Puiu
in Nanotechnology, Research
Reading Time: 3 mins read
A A
Share on FacebookShare on TwitterSubmit to Reddit 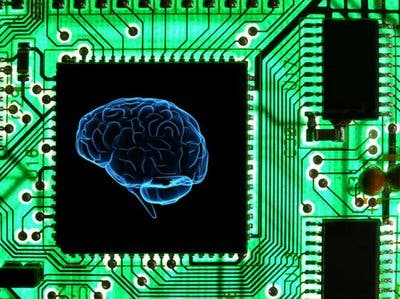 In its most simple form, a memristor can be defined as a two-terminal electronic device whose conductance can be precisely modulated by charge or flux through it. What sets it apart from other electrical components is the property that its resistance can be programmed  and subsequently remains stored (memory).

Basically, memristors resist the passage of electric current, which means that they remember how much current passed previously. It’s a property that can provide to be invaluable for further advances in the electronics fields, and scientists from HP have taken one step further in descifering the memristor’s secrets.

Memristors were first described in 1971. Prior to that, scientists knew of only three basic circuit elements – the resistor, the capacitor and the inductor. Professor Leon Chua posited that there was a fourth.

R. Stanley Williams, professor at the University of California, Berkeley was the one who revived interest in the scientific community for memristors when he presented an experimental solid state version. Williams currently leads a team at Hewlett Packard, together with researchers at the University of California, Santa Barbara, who have analyzed in unprecedented detail the physical and chemical properties of an electronic device that computer engineers hope will transform computing. Their latest research, published in the online edition of Nanotechnology, the team correlate device electrical characteristics with local atomic structure, chemistry and temperature.

“We were on a path where we would have had something that works reasonably well, but this improves our confidence and should allow us to improve the devices such that they are significantly better,” said Stan Williams, a senior official at HP.

HP’s latest breakthrough was met after they used highly focused X-rays to pinpoint a channel, just 100 nanometers wide, where the resistance switching takes place – memristors are extremely tiny in scale and because of this research has always been very slow. Using the X-ray correlated data, scientists mapped out the chemistry and structure of that channel, and thus gained a better idea of how memristors operate. More importantly, scientists have presented in the paper how  for the first time where the current switching process happens in the devices, and how heat affects it.

Since memristors have the ability to ‘remember’ the total electronic charge that passes through them, a good analogy which could become a scientific fact, is they actually act like synapses within electronic circuits. This means that a network of memristors could mimick the brain’s own network of neurons,  which enables perception, thought and memory. Thus memristors are believed to hold promise for a wide range of applications, including semi-autonomous robots.

“We now have a direct picture for the thermal profile that is highly localized around this channel during electrical operation, and is likely to play a large role in accelerating the physics driving the memristive behavior” says John Paul Strachan of the nanoElectronics Research Group at Hewlett-Packard Labs.

If this is the first time you hear about memristors, than you’re most probably already hooked on the subject, but at the same time very confused. I’d recommend watching Dr. Stanley Williams’s whiteboard talk about how the device works located just below.