by Mihai Andrei
in Materials, News
A A

Using relatively simple perforated sheets of plastic and an extensive amount computation, Duke University researchers have created the world’s first sound invisibility cloak. The cloak diverts sound waves in a way that it conceals both itself, and anything hidden beneath it.

The device is, of course, 3D, and it works in the same way, no matter what direction the sound is coming from or where the observer is located. The device can be used to cloak things from sound-based detectors, having future applications in sonar avoidance and architectural acoustics, for example.

“The particular trick we’re performing is hiding an object from sound waves,” said “By placing this cloak around an object, the sound waves behave like there is nothing more than a flat surface in their path.”

In order to do this, Duke University professor of electrical and computer engineering Steven Cummer and his colleagues used metamaterials – a combination of normal materials in repeating patterns which result in remarkable, unnatural properties. If you look at it, the device looks just like several perforated plastic plates with a repeating pattern of holes poked through them stacked on top of one another just like a pyramid.

In order to function, it has to divert soundwaves in such a way that it looks like the pyramid isn’t there – something which requires a lot of crafting and projecting. Because the sound is not reaching the surface beneath, it is traveling a shorter distance and its speed must be slowed to compensate.

So, after they developed the design and created the cloak, it was testing time! In order to test it, they covered a small sphere and pinged it with soundwaves from various distances. Using special microphones, they then mapped how the waves responded and produced videos of them traveling through the air – and everything went out fine. 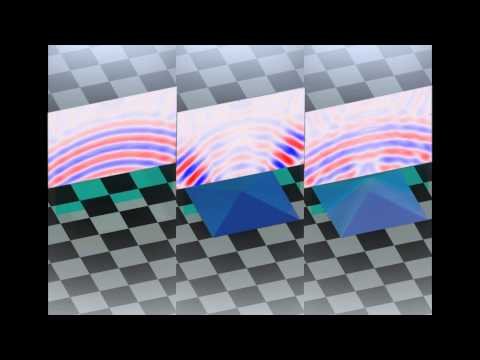 “We conducted our tests in the air, but sound waves behave similarly underwater, so one obvious potential use is sonar avoidance,” said Cummer. “But there’s also the design of auditoriums or concert halls — any space where you need to control the acoustics. If you had to put a beam somewhere for structural reasons that was going to mess up the sound, perhaps you could fix the acoustics by cloaking it.”

The study was published online in Nature Materials.