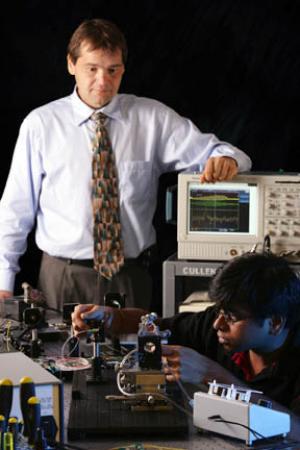 It may not rank among the top 10 causes of death, but decompression sickness could be deadly. Using a $400,000 grant from the U.S. Navy to develop the first optical non-invasive tool to test those most likely to suffer from decompression sickness, such as scuba divers a University of Houston professor is developing a laser-based system that can diagnose the sickness in a matter of seconds.

“Most of the time, decompression sickness isn’t addressed until the person starts showing clinical symptoms,” Larin said. “It would be better, of course, to treat the problem before the symptoms appear. That would allow individuals to take the appropriate medical actions to reduce the side effects of decompression sickness.”

His work is able to locate the presence of nitrogen gas – or microbubbles – in the blood and in the tissues and this means the flow of blood is restricted. The tool has a way of functioning which resembles that of an ultrasound machine.

Instead of getting readings using sound waves, however, Larin’s system uses light waves in the form of lasers that bounce back when they encounter resistance, thereby providing a high-resolution image. The navy could use this technology and it could save numerous lives but it could be used just as good in the International Space Station where the individuals moving from a ship to the station have suffered from the effects of decompression sickness.