Laser beam believed to be the most intense

by Mihai Andrei
in Physics, Research
Reading Time: 2 mins read
A A 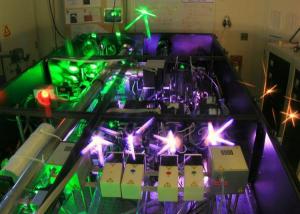 Now picture the following situation: You have a giant magnifying glass in space and you use it to focus all the sunlight shining toward Earth onto one grain of sand. That ray would be almost as powerful as this laser!

“That’s the instantaneous intensity we can produce,” said Karl Krushelnick, a physics and engineering professor. “I don’t know of another place in the universe that would have this intensity of light. We believe this is a record.”

It lasts just 30 femtoseconds. In case you know your physics, you know that a femtosecond is a millionth of a billionth of a second. It could have a major significance, because it could bring better proton and electron beams for radiation treatment of cancer, among other applications. Also, this beam measures 20 billion trillion watts per square centimeter. It contains 300 terawatts of power. That’s 300 times the capacity of the entire U.S. electricity grid.

In addition to the medical purposes, it could also help scientists understand numerous things they have previously failed to comprehend.Some scientists also see applications in inertial confinement fusion research, coaxing low-mass atoms to join together into heavier ones and release energy in the process. A paper on this research is published online in the journal Optics Express.