Scientists in Sweden have created an ‘impossible’ material called Upsalite

by Mihai Andrei
in Inventions, Materials
Reading Time: 2 mins read
A A
Share on FacebookShare on TwitterSubmit to Reddit

It may not look like much, but this material has wonderous properties, according to Swedish researchers.  The magnesium carbonate is extremely porous, setting new records in terms of surface area and water absorbtion, potentially having all sorts of applications, from controlling moisture in electronic and medical procedures to gathering up pollutants from oil spills. 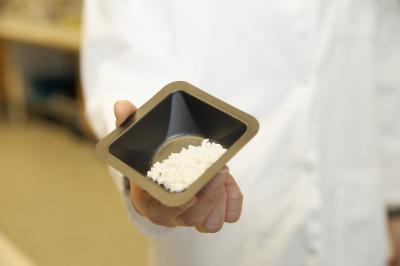 Still, the practical, economic potential for uppsalite has limited prospects at the moment – its discovery is significant rather because it was thought as impossible to develop. But with a surface area of 800 square meters per gram, Upsalite is reported to have the highest surface area measured for an alkali earth metal carbonate ever created. It also much better at low relative pressure uptake for water than currently used materials (such as the naturally occuring, relatively abundant zeolites), but it’s not yet clear if it has the potential to be financially viable.

Named this way after the Uppsala University in Sweden, the wonder material can retain more than 75% of the adsorbed water when the humidity is decreased from 95% to 5% at room temperature, which also means it can be used in drug delivery and catalysis.

“This, together with other unique properties of the discovered impossible material is expected to pave the way for new sustainable products in a number of industrial applications”, study co-author Maria Strømme, a professor of nanotechnology at the university, said in the statement.