by Tibi Puiu
in Anthropology, Psychology, Research, Studies
Reading Time: 3 mins read
A A
Share on FacebookShare on TwitterSubmit to Reddit

Part of a study which sought to see how deeply rooted is our psychological projection inherited from our ancestors when faced with a physical situation, scientists concluded that holding a knife or gun causes one to be perceived as bigger. Anthropologists consider this behavior as evidence, coupled with other studies, that backs up the idea according to which humans, like most animals, screen threats according to two basic factors – size and strength. 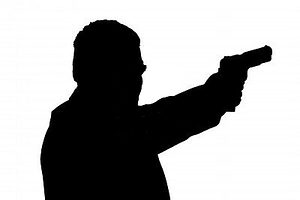 UCLA anthropologists asked hundreds of volunteers dispersed across the USA to evaluate the size and muscularity of four men based solely on photographs that only showed their hands holding an easily recognizable object, including a handgun and kitchen knife. They were asked to choose from various silhouettes that would best match the rest of object holder’s body, instead of inputting a rating. Various correction factors were thought out to eliminate false screenings due to stereotyping.

Study participants consistently judged pistol-packers to be taller and stronger than the men holding the other objects, even though the experiment’s four hand models basically had more or less the same hand size and didn’t possess any scars or tattoos. On average, participants judged pistol packers to be 17 percent taller and stronger than those judged to be the smallest and weakest men — the ones holding caulking guns.

“There’s nothing about the knowledge that gun powder makes lead bullets fly through the air at damage-causing speeds that should make you think that a gun-bearer is bigger or stronger, yet you do,” said Daniel Fessler, the lead author of the study and an associate professor of anthropology at UCLA. “Danger really does loom large — in our minds.”

The study is part of larger project funded by the U.S. Air Force Office of Scientific Research to understand how people make decisions in situations where violent conflict is a possibility. Hopefully, this might lead to better decision-making, non-obstructed by limiting beliefs.

“We’ve isolated a capacity to assess threats in a simple way,” said Colin Holbrook, a UCLA postdoctoral scholar in anthropology and co-author of the study. “Though this capacity is very efficient, it can misguide us.”

“We’re exploring how people think about the relative likelihood that they will win a conflict, and then how those thoughts affect their decisions about whether to enter into conflict,” said Fessler, whose research focuses on the biological and cultural bases of human behavior

The scientists involved in the study believe there’s an unconscious mental mechanism which translates the magnitude of a threat and adds them to the basic dimensions used by our early hominid ancestors, as well as every animal today, for sizing up adversaries – size and strength. Previous work showed that people were inclined to judge the physical strength of person based only on looking at their bodies or faces or listening to their voices. The UCLA study now adds even more weight to the fact that our race is still deeply and instinctively concerned with how strong other people are and whether or not they’re a threat, despite our somewhat vast cultural heritage.

“It’s not Dirty Harry’s or Rambo’s handgun — it’s just a kitchen knife, but it’s still deadly,” Holbrook said. “And our study subjects responded accordingly, estimating its holder to be bigger and stronger than the rest.”