by Mara Bujor
in Biology, Discoveries, Research
A A 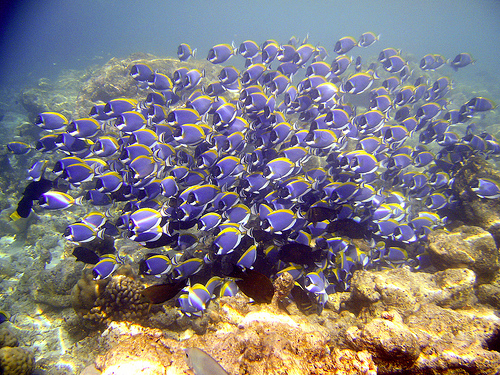 People are faced with making decisions everyday and more than that they find themselves in the situation of trusting a group in jury trials, elections or even when it comes to TV shows such as American Idol.

Fish have to face the same situation when gathered in schools as the decision they have to make is tough because they must find the best of them to follow. New research showing that a larger group is more likely to find the best solution was reported online by scientists on November 13th in Current Biology.

After studying a species of stickleback, Gasterosteus aculeatus, researchers noticed that strong, fat and healthy fish were preferred to others when taking the lead. If a fish has parasites, black spots or doesn’t look well-fed he will not be chosen to be the leader.

Ashley Ward, a biologist from the University of Sydney in Australia claims that sticklebacks can prove to be quite judgmental when it comes to looks. A “handsome” fish” appears to be more trustworthy as the study has shown.

After creating a replica of the best and of the least-wanted leader, the researchers put the sticklebacks in the situation of choosing which one to follow. About half of the fish made the correct decision. When another fish was added to the aquarium the percentage did not change very much, but as their number increased, more and more tended to follow the healthy, good-looking fish. When their number increased to eight, 80% chose to follow the good leader.

It is thought that collective wisdom is given by the fact that each individual has some pieces of information which, put together, can give a clear picture. For example one fish can notice a weakness in the one to follow that others haven’t. This research brings new light into the benefits of living in a group even though there is still a risk involved in it.

In a few cases all fish took the wrong decision, thus following the wrong leader. This way, the bad effect was amplified. This can also be applied to humans as collective mistaken decisions stretch from fashion to politics.

Researchers have also developed an equation to see how much one’s individual desires matter and how much the group’s. They use the quorum rule to explain the process as the larger the number of the fish making a decision was the more they influenced the others, which is a good way of making compromises.