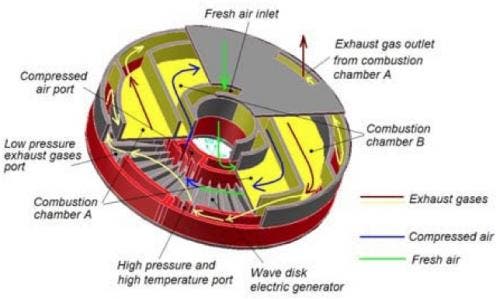 Here’s something you probably didn’t know about your average internal combustion car engine: it only uses 15 percent for propulsion! Of course it could never go up to 100 percent or even close to this value, but fifteen is just too low. Researchers at Michigan State University thought about the same thing, so they built a prototype that uses 60 percent of fuel for propulsion; the prototype could reduce car emissions by 90%, and doesn’t have any valves, pistons or crankshafts.

The new prototype’s core is a disk-shaped wave generator, about as big as an average saucepan, and requires no transmission, no cooling, so you’ll not only be doing something great for nature and using less gas, but you will also be spending way less money on maintenance too.

The engine works like this: “A rotor, with a wave-like pattern carved into channels. The fuel and air enter and mix through the central inlets. The rotor then spins, blocking the exit of gasses. As the pressure builds it will generate a shock wave that will compress the mixture. Once it is ignited an outlet opens to let the hot gases escape, and your car can move as usual.” (Physorg).

The prototype was developed and presented by Norbert Müller and other colleagues at Michigan State University at a meeting with the Department of Energy’s Advanced Research Projects Agency. It’s exactly this kind of research that can make a big technological leap on a global scale that our society needs, if you ask me.