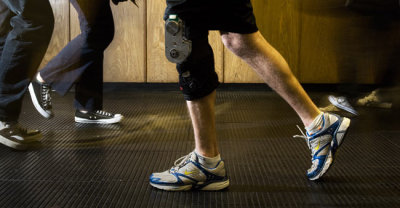 Charging your cell phone may be as simple as a walk in the park – literally. Scientists have created a mechanism that harvests the mechanical energy from the knees while you are walking. To prove this fascinating concept, they used six volunteers which wore the device while walking on a treadmill and were able to produce about five watts of electrical power each. That means they each produced enough energy for about 10 cell phones!The results were published in the Feb. 8 issue of the journal, Science. Here’s the scientists’ claim on the device:

“Since muscles are the powerhouses of the body, my colleagues and I designed our device to generate electricity from the motion of the knee joint,” said Max Donelan, director of the Locomotion Laboratory at Simon Fraser University in Canada. “It resembles a knee brace and weighs about 1.5 kilograms [3.3 pounds] including the gearing and generator.”

The process itself is fairly simple, as it uses an electrical generator which is coupled to the knee and captures the energy of a person’s movement. When whoever wears it extends the knee, a part of the device starts spinning the generator, which produces energy and when the knee is flexed (here comes the brilliant simplicity) the device is turned off, so as not to consume energy. The machine senses motion and it knows when to turn off and on. Scientists also measured the oxygen intake and carbon-dioxide outtake and found out that it requires very little extra energy from the wearer.

“People are an excellent source of portable power,” Donelan said. “An average-sized person stores as much energy in fat as a 1,000-kilogram battery. People recharge their body batteries with food and, lucky for us, there is about as much useful energy in a 35-gram granola bar as in a 3.5-kilogram lithium-ion battery.”

There has been word of a similar device using a backpack almost three years ago, but it hasn’t materialized yet. This work sounds incredibly near, it could be used to power computers and other electrical machines where energy is scarce.